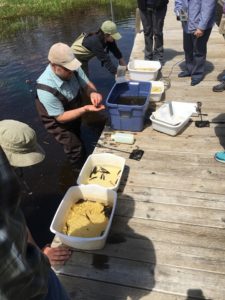 Many people associate Woodland Dunes with it’s birdlife and we encourage that.  Birds are colorful, announce themselves with their songs, and are in general easy to find.  There are more than 100 species that are found here each year, from bald eagles to hummingbirds and they are found in every different habitat in our preserve.  They impress and delight both our staff and visitors and are important aspects of this place.
Woodland Dunes is so much more than just birds, however.  It is a rich and complex mosaic of habitats, centered around the ancient ridges and swales which are considered globally important.  Each of those habitats have thousands of components- species- that keep them functioning as they should.  Unlike birds, many of those species are hidden from us, or at least not noticed.
Much of Woodland Dunes is wetland.  If it were drier it probably would have been developed for human use long ago.  Wetlands are special places.  They store and clean surface water and provide homes for many species of wildlife, more than upland areas do.  The marshes, streams, and swales are nurseries for many insects, amphibians, turtles, and even fish.
We are so fortunate to have at UW-Green Bay, Manitowoc Campus, Dr. Titus Seilheimer, a fisheries specialist who works with the UW Sea Grant program.  He is an excellent resource for people in this region and presents many public programs in the area in addition to his research projects.  In addition to his knowledge of fisheries, he has also researched coastal wetlands and his knowledge is especially helpful to those of us who are interested in the East and West Twin and their estuaries, the Little Manitowoc, and the like.
Recently, Dr. Seilheimer presented a program about the importance of coastal wetlands in our area, focusing on those we have within our preserve- ridges and swales, marsh, and associated areas.  With the help of our summer interns, he placed nets in waters near our Cattail Trail boardwalk to determine what fish species are using that habitat.   Now, I have been at Woodland Dunes a long time, and over the years we have caught a number of fish while doing salamander surveys in early spring.  I was not prepared, however, for what we encountered when the first net was lifted- hundreds of central mudminnows, sticklebacks, fathead minnows, a brown bullhead, along with other interesting creatures such as virile crayfish, leeches, and a predaceous diving beetle.  The crayfish were females, and each clutched hundreds of eggs beneath their curved tails.  The net had been set near a stream which flowed from the forested swales in the preserve, providing a path for these animals to move back and forth between the river and marsh and the forest.
The second net was set further downstream in the marsh, in what was a sedge meadow before the current high water levels.  That net did not hold as many fish, but those it did were still interesting- a pumpkinseed sunfish, a couple of minnow species, and a dace in addition to bullhead and mudminnows. There were also two painted turtles which made their way into the net, which was decorated with bladderwort, a particularly interesting plant.  Along it’s stem are little pouches (bladders) which are able to suck in and hold tiny insects and other animals, which it then digests.
The opportunity to explore a natural area with an expert always yields new and interesting things.  In this case, Dr. Seilheimer helped uncover some of the many species within our preserve which are usually unseen and unimagined.  He, and UW- Sea Grant are a tremendous asset in understanding the nature of our Lakeshore.