Late May is a wondrous time in Wisconsin.  Deciduous trees and shrubs are cloaked in newly emerging leaves, and conifer branches are tipped with light green new growth.  Wildflowers burst from the ground and the first of the spring ephemerals are already fading away.  Likewise, the damp weather has helped mushrooms prosper, and thanks to cool temperatures there are still spring peepers calling among the chorus of toads. Insects are also emerging to pollinate what they can and mate near the water. Deer are birthing their fawns. Early morning strolls aren’t long enough, there is so much to see. 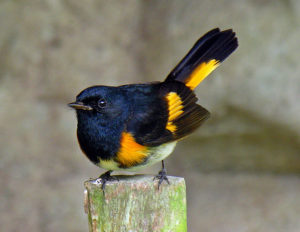 Every morning there are new (for the year) birds in the woods and at the feeders.  Orioles and grosbeaks are everywhere, with indigo buntings, catbirds, and a host of warblers and little brown things. Many have flown northward all night, and now must recover with food and rest, before moving on again. The migrants we see have traveled over a thousand miles on their own power, almost unbelievable for creatures weighing just a few grams. In the past, there were many large expanses of unbroken habitat for birds to use as they traveled. Their journey is more dangerous now as the landscape includes tall buildings, transmission lines, smaller habitat patches, cars and trucks, and new predators like cats. Migratory birds have over the years staked their existence on the ability to move long distances with the seasons, but those journeys are becoming more difficult all the time. Every year, some don’t make it.

Recently, we received a call at our nature center about a small bird that was found dead near here.  The wonderful caller found the bird in his yard and described it as a tiny version of an oriole.  Such a description fits that of an American Redstart, one of the warblers which not only migrates through our area, but also nests here. The bird had an aluminum band on its leg, meaning it had been caught, banded, and released by a licensed bird bander. The band number was 2790-60620, a number unique to that bird.  No bird before or since will ever have that band number. This makes it possible to contact the USGS Bird Banding Laboratory in Maryland to inquire as to the banding information for that bird. Here is what we learned: an American Redstart, male, was banded in Thunder Bay, Ontario on September 4, 2017. It was estimated to be at least a year old at that time.

This remarkable little bird traveled from Canada to Central America or vice versa at least six times. If it spent the winter in, say Costa Rica, the trip would be about 3,800 miles. Six trips is about 22,800 miles- nearly the circumference of the Earth, and all made possible by only wings and muscles powered by a diet of insects. I’m not aware of how the bird died, but I find it incredibly sad when these hardy and athletic creatures travel so far only to be killed by man-made hazards thoughtlessly placed in their way. They bring so much joy to our lives- yet we take their safety for granted. Perhaps we should do a little more to help them. I know I am going to take a second look at the windows in my house, and try to make them a little safer.  It’s the least I can do.