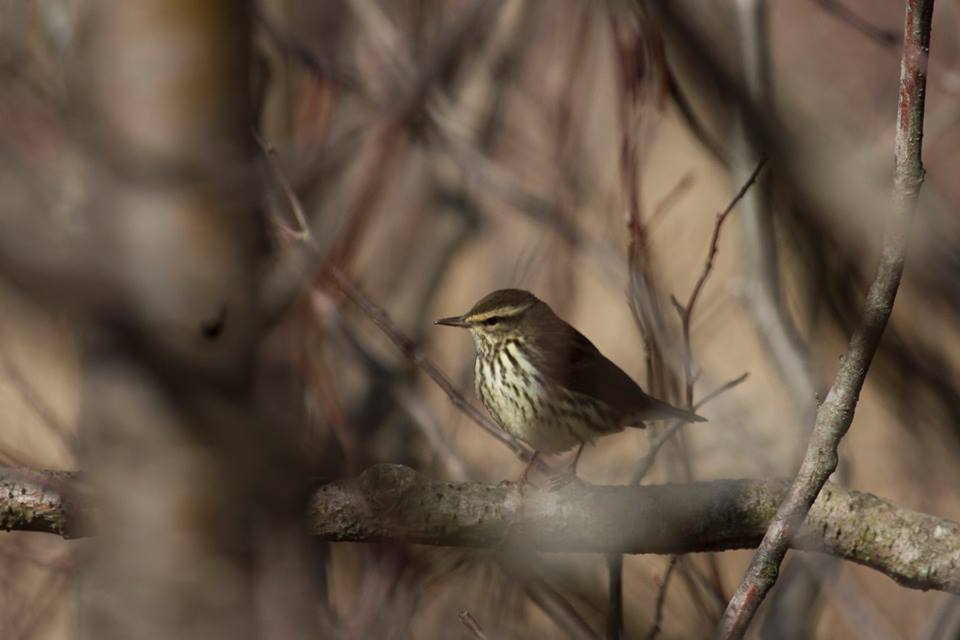 Now we stand at the peak of spring. For birdwatchers, the weather has presented a challenge and east and north winds have not helped bring migrating birds to our area. I suspect that insects are less active near the cold Lakeshore, and birds may be moving inland where it’s warmer during this migration season.  Still, some really “good birds” have been showing up – orioles, hummingbirds, indigo buntings, rose-breasted grosbeaks, and interesting sandpipers like whimbrels. At the same, time trees are leafing out or blooming and toads are singing by the thousands. Life is bursting at the seams.

A magical moment occurred a few evenings ago.  I happened to be near the edge of a river right at sunset. The wind had died, the sky was fair, and tiny insects were hatching. They flew, and rested on trees along the shore. There they encountered many warblers searching for their evening meal.  I didn’t have binoculars with me, of course, but I  could easily recognize a number of species- palm, chestnut-sided, and yellow warblers, ruby-crowned kinglets, and others. Mostly silent except for little call notes, the warblers carefully and thoroughly inspected the tree branches, consuming bugs I couldn’t even see. In the misty twilight the scene was otherworldly, reminding me of a scene from the Amazon or perhaps some other forested planet. It made me appreciate that these little migrants had navigated up from the tropics, past large cities like Chicago, and were thus through the most dangerous part of this spring’s migration. Many songbirds migrate at night and I’m pretty sure the batch I was watching were feeding prior to taking flight. After a night of flying at 3,000 feet or so, it takes them a few days to refuel before attempting another segment of their journey. It’s an amazing feat for animals which weigh only a few grams.

Later that night, after dark, I was back outside. The toads were still singing and overhead were the faint peeps of songbirds flying. These little flight notes help birds communicate with each other as they fly in the dark. In the morning they will land perhaps 150 miles from where they started, to feed and rest up before attempting the next leg of their journey.

It’s easy to like and appreciate cute songbirds and lovely wildflowers. It’s important to understand just how important they are as well to making the natural world function as it’s supposed to.  Also, to be aware of the incredible challenges they face as we contribute to an ever-changing world. They, and our other native species are precious living things from which we can learn much. They need to be able to co-exist with us, especially during this migration season.  And we need to care for them and for the land on which we all live.

photo- a northern waterthrush, a warbler that nests at Woodland Dunes, by Nancy Nabak