Not knowing what one will encounter is one of the joys of taking a walk in a natural area.  This time of year, there are new birds and wildflowers showing themselves every day, including insects, mammals, and everything else.  If we don’t see them it’s because we are preoccupied with other issues in our lives.  This is understandable, but we miss so much if we view nature as so much green. 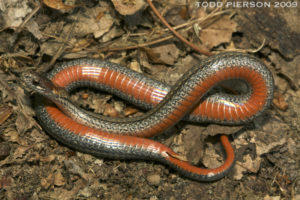 Cold-blooded animals are no less interesting than their warm-blooded counterparts. It’s interesting to think about how both groups have been able to find success in the business of survival.  The herpetiles, reptiles and amphibians play a huge role in nature – although they often go unnoticed once the frogs and toads stop singing.  Around here our reptiles consist of turtles and snakes.  Turtles are a common sight right now, as females leave ponds to try to find a safe place to bury their eggs. (Mammals, like raccoons, make that a very unlikely proposition.)  And humans driving cars make it very dangerous for the adults.

Snakes can be very numerous in spring as some species congregate in large numbers. These congregations of snakes can emerge at once in large numbers from their hibernacula, the below-ground places they spend the winter.  Garter snakes do this, and to some people, it can be startling to see a mass of snakes in one location.

Mating also takes place at this time, and the larger females become entwined and covered with many males.  If you see this, you are lucky, as you have to be at the right place at exactly the right time.  Other large snakes such as fox (pine) snakes do this also. They tend to hang around throughout the summer near an underground refuge, causing some distress if they are near people.  Northern water snakes are another large species that brumate with others- and it is possible to find several species together in winter colonies.

Surprising to many of us, there are a number of smaller snake species found in our area that often go unnoticed.  A recent walk on one of our trails revealed a sunning red-bellied snake, a gentle little species not that much bigger than a nightcrawler.  They have a brown color on its back with an orange belly and can be picked up gently without fear of being bitten.  At least I’ve never seen one attempt to bite.  The ring-necked snake is the same size and almost identical in appearance but with a noticeable ring of lighter-colored scales just behind the head.  Another small brown snake with a light gray belly is the Brown or DeKay’s snake, again a non-aggressive little creature.

Another small snake is the milk snake, which has an interesting pattern of black and silver on it’s back.  Again, they offer no harm. The green snake is true to its name and is a beautiful emerald green color – very well camouflaged this time of year.  Both are gentle and worth taking a close look at if the opportunity arises.

Although these snakes are small and gentle, that doesn’t mean they’re defenseless- some are able to exude a foul-smelling liquid if they are handled.  If that happens, all it requires is some hand-washing.  One wouldn’t want to get that liquid in one’s eyes I’m sure, but that doesn’t seem too likely.  As with most things, a little common sense is all that’s needed.

There are no poisonous snakes recorded in Manitowoc County so we can feel free to explore the outdoors without that concern.  And when we do so, we can watch for the many creatures that fly “below our radar” and are often unseen.

photo is a red-bellied snake from iNaturalist.org