I made an early morning hike up Willow Trail at the Dunes to assess the conditions for our visitors. Sometimes Willow Trail can be really fun for those who want to muck around in rubber boots. While I was evaluating the trail, I noticed how many birds were singing their little syrinx out. (Bird Nerd Alert: The voice-box of a bird is called the syrinx, compared to the larynx in mammals.) 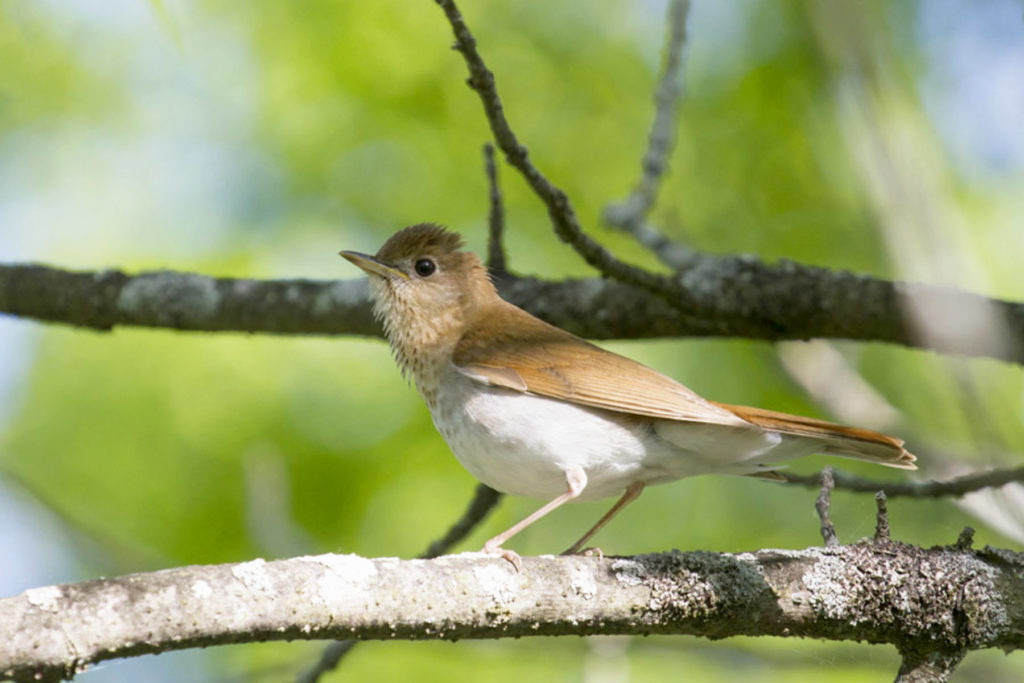 The variety of songs was so terrific that I recorded a minute and a half of bird music on my phone. In this short amount of time and space and out of all the hundreds of possibilities, I captured one of the pure, understated, yet dynamic thrills of the bird world, the Veery.

The Veery has a very unique and easily distinguishable song, a descending metallic, “veer,” that’s sometimes repeated and spirals downward as it sings. Actually, a group of nineteenth-century observers called its song, “an inexpressibly delicate metallic utterance…accompanied by a fine trill which renders it truly seductive.”

“Seductive.” What a powerful and important word for birds. Especially for males who are looking for a partner in the spring. For them, it’s showtime.

In reality, I actually captured two Veeries calling. However, this was not their seductive song, but rather a single, descending note. One called and then there was about a six second pause before another was heard from the north. The metallic calls continued, but at a four second space between the two, and eventually only 1 second between the first and second call. Finally, they were calling right on top of each other.

My assumption is that these were both males in some form of communication. (Another bird nerd fact: we are continually learning more and more about female call backs than we’ve ever known before.) Researchers believe this behavior may be a territorial claim. Or some statement of excitability – the calls quickening and bumping into each other. Until we can clearly speak bird language, no one is exactly sure what it means, but territorial issues are likely part of the purpose.

Although the Veeries had captivated me with their interesting behavior, they weren’t the only game in town. I realized that I had stumbled upon a Block Party already in progress. Other than the Veery, those in attendance were: Common yellow throat, Yellow warbler, Blue-winged warbler (a rare treat), Northern cardinal, House wren, Red-eyed vireo, Indigo bunting, Black-capped chickadee, American red-start, Gray catbird and the Alder flycatcher. I wasn’t invited to join, but I silently crashed their party anyway, and made sure not to disturb their morning jam session.

Come share in what I experienced! Treat your ears to a morning walk on our Trails. If you hear it, pause and surrender to the Veery seduction song. And let the songbird serenade lift you to an idyllic start of your day.