So often the things right under our nose don’t get the attention they deserve until they are seen in a different way.  This realization happens every year at this time when we travel all parts of our preserve to conduct summer bird surveys.  These surveys have been done for more than 40 years each June after the spring migration has ceased, usually starting June 10.

Initially, 11 routes were walked, on and off-trail, and every bird seen or heard was counted.  Due to restraints on our time, and in an effort to make the data more useful, we have established 28 points throughout the main preserve in easily locatable places. These are visited for 10 minute periods.  Most birds are heard but not seen, thanks to the thick foliage on trees and shrubs. One of the wonderful things about birds is that their songs are often loud and distinct, so they can be detected under such conditions. 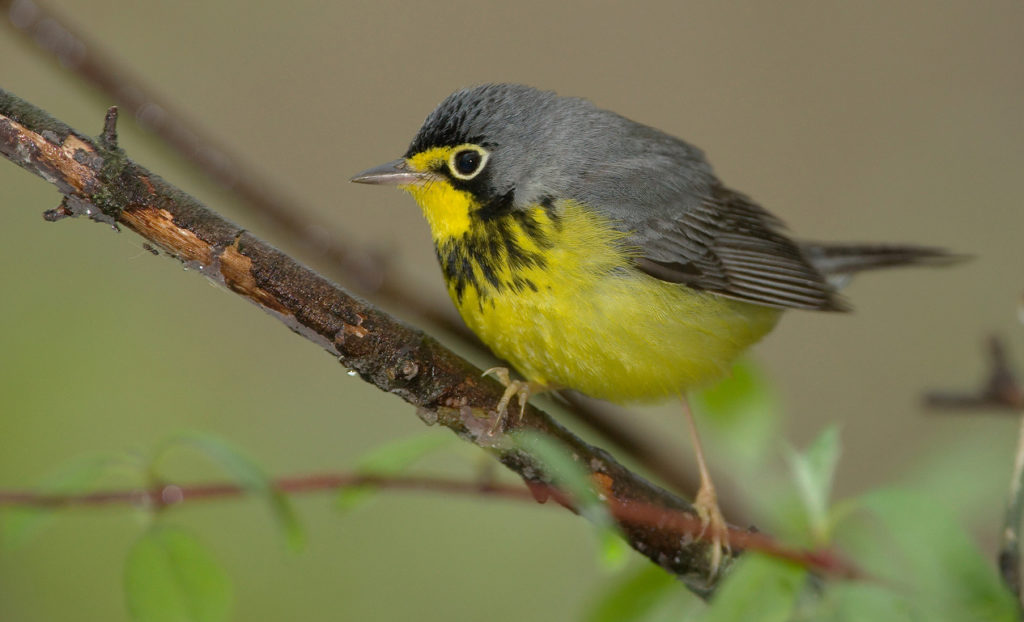 There are two times of day when the world seems truly magical- dawn and dusk- and being outdoors at those times allows us to experience a different world.

The preserve in early morning is hazy and often still, with lush green leaves all around and wildflowers below.  It is anything but quiet- after a night’s rest birds are ready to advertise the location of their territories and their fitness as both a defender of that space and as a mate.

That they all sing simultaneously makes doing surveys challenging sometimes.  While birds probably don’t care that much about the songs of other species, we frantically try to record each of them.  Some songs are much louder than others. For some, great volume is apparently not required to get one’s point across to others of its kind.  All the calls are noted during the 10 minute count period.  Thanks to technology, the species can be recorded using an app on a cellphone and the data immediately archived.

And so we travel through this mysterious world noting the music produced by those who live here.  On our first day this year, counting five points, we encountered 29 species, including such lovely and seldom noticed bird as the veery, blue-gray gnatcatcher, mourning and Canada warblers, and the Red-shouldered hawk. The last two species are considered of greatest conservation need.

To be surrounded by such unusual wildlife in such a wonderful setting is better than any nature documentary. To immerse yourself in this world is good for you in probably more ways than we realize.  And then there are the other wildlife encounters – a mother possum covered with her clinging young, a curious doe, the occasional fox (red or gray), which glides silently through the forest and into our morning experience.

These surveys take some effort and forebearance- getting up early is not easy, and mosquitoes can be hungry, but being there is worth it.  Typically, 100 or so species of birds is recorded in the Woodland Dunes preserve, a reflection of the special place that it is.  The species list has changed over the years and that bears watching.

There are 23 points yet to be counted for this year, so a few more early mornings are in order.  Coffee works great to get the morning started, and the wonders of the preserve will keep us going as we document the amazing wildlife of our Lakeshore.