During one of my first days as an intern at Woodland Dunes Nature Center, I was out at the Manitowoc Lakefront Birding Area helping staff members water and mulch some native trees and shrubs that they had previously planted.  As the name suggests, there were a variety of birds active in the area, from flocks of nesting gulls to purple martens.  I have almost no experience as a birder, so I was relying on the staff members to point out the calls and defining characteristics of the species we saw. 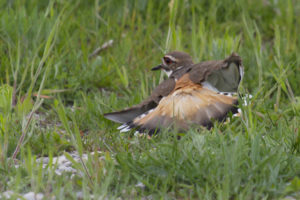 At one point, we saw a medium-sized, tawny brown-and-white bird with long legs hopping along the ground.  Jim, Woodland Dunes’ Executive Director, identified it as a killdeer – a species that I had not heard of previously.  We began to walk toward the bird to get a better look.  As we approached, the killdeer raised its wings.  I thought it was about to fly away, but instead, it began to walk around while emitting a loud, shrill call.  Jim explained that this killdeer was actually performing a distraction display – a behavior intended to distract a potential predator from its nest.  Killdeer lay their eggs on the ground and we were probably walking directly toward this bird’s nest.  It perceived us as predators, and was attempting to lead us away from its clutch.

Abnormally positioned wings and distress calls mimic a wing injury, and thus signal an easy meal for a would-be egg thief.  Once the predator notices this and begins to pursue its dinner, the bird leads it away from its nest before suddenly “healing” and flying away.  We retreated from the killdeer, not wanting to disturb its nest.  However, I was impressed by this clever nest defense strategy and wanted to learn more.

Distraction displays are not limited to killdeer, or even to nesting birds.  Even though they are most common in birds, they have been observed in fish and mammal species as well.  Displays can take a variety of forms.  Plovers, a family of wading birds of which the killdeer is a member, are known for their use of “false brooding” displays in which the plover crouches and broods on a non-existent nest, drawing predators away from the location of the real nest.  Plovers, along with other types of birds, can also distract predators by ruffling their feathers, crouching and running away from their nest to mimic the flight response of a small rodent.  Killdeer are the most well-known practitioners of the “broken wing” display.

It’s obvious that the ability to lure predators away from vulnerable eggs or juveniles gives an adaptive advantage in the form of reduced infant mortality.  However, it is much less obvious how such apparently sophisticated behaviors could have evolved in animals that are not generally known for their cleverness.  One theory is that they arose as a instinctual fear response to the presence of a predator.  In species experiencing heavy predation pressure, a fear response that happened to distract predators would reduce predation and cause that specific response to undergo positive selection.

Another theory is that distraction displays are the result of a nesting bird’s conflicting instinctual impulses to at once attack the predator, protect its young and escape the threat.  Through a process known as displacement, an animal experiencing such conflicting stressors may initiate an irregular “intermediate” behavior in response.  If this displacement behavior happened to distract predators, it would undergo positive selection.  Whatever the origin of distraction displays, they are fascinating examples of animal’s abilities to adopt ingenious and unexpected solutions to the problems they face.

photo of a killdeer doing a distraction display, taken by Nancy Nabak