Suddenly, it’s midsummer.  Of all the seasons, the midsummer period never fails to catch me by surprise- where did spring and early summer go?  Fall perhaps progresses as rapidly, and midwinter and early spring seem to crawl.  The life of the forest, which a month ago seemed a little sparse, is now building in abundance and diversity.  Many baby birds are already fledged, and fawns follow their mothers about experiencing the world for the first time.  Mother possums labor along, literally covered with their young.  Their work, like that of all mothers, is never done.

The transition from day to night is just as interesting as the dawn.  Many wild species have the good sense to avoid the harshness of midday and its heat, and a different world reveals itself at dusk.  Some birds sing different songs at these transitional times, some become more active, and some find safe places to roost.  In the daylight, swallows and swifts chase down insects on the wing, but at dusk, if one is fortunate, one might witness nighthawks taking over those activities, but there aren’t as many as there used to be.  Bats too take the place of the swallows at night- in that ingenious way they are able to use the same habitat without competing, separated by time rather than distance.  And, too, there are different insects present in the air at different times of day and night- recently researchers have found that some of the night-flying insects have the ability to mimic and therefore “jam” the locating sounds that bats produce.  This aerial dance of life and death continues 24 hours a day, and its amazing how many interactions in nature take place above the ground, unseen by us. 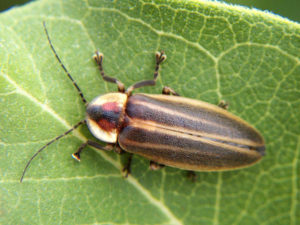 If insects of the bloodthirsty sort allow us to observe the transition, dusk is an amazing time to be out.  When I was young, summer vacation meant the opportunity to be outside all the time, but the cool, damp of dusk was wonderful.  We pitched horrible musty canvas pup tents with no floors and enjoyed every minute of our camp-outs.  As it became darker the world became more mystical, especially when the little green lights of fireflies appeared first in the grass, then one by one rose into the air.  We’d catch some with our hands and put them in mason jars, and they were our tent night-lights, to be released in the morning when the sun beating on the canvas made it unbearably warm.  I didn’t know then that there were more than one kind of firefly, in fact three genera of them- Photinus, Photuris, and Pyractomena, or that the light from fireflies can come in greenish, blue-green, or yellow colors.  Or that the larvae of fireflies are fierce predators of other insects and that some adults mimic the flashes of their cousins so as to lure and dine on them.

Through the night we would hear the sounds of the green frogs by the river, a barred owl, a whip-poor-will, a startled deer, and the never-ending hum of mosquitoes who invited themselves into our screenless shelters.  A lot of the time, I don’t think we really attempted to sleep- it was far too much fun to be with friends outside on a delicious summer night.  And although we were unaware of the science behind what we saw and heard, the outside world of a midsummer’s night was just about as magical as Shakespeare imagined it to be.

photo attached- a firefly from wikipedia