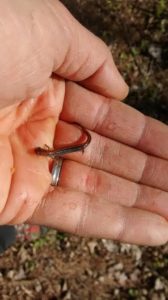 Like the students who visit Woodland Dunes, our staff and volunteers enjoy experiencing nature in a hands-on manner.  One of the best parts of our jobs is to occasionally go out into the wild and look for animals and plants in their world.  Sometimes it involves walking on a nice dry boardwalk with binoculars looking for birds. Other times it might mean wading into a wetland to sieve out tiny invertebrates (involving a lot of odorous water and mud).  Or, sometimes it’s digging into the soil and perhaps teasing apart the decaying fibers of a rotting log.  All of these worlds are homes for unique communities of creatures, even though they may not meet our standards for sanitation. These dirty, smelly places are bursting with life, and often surprises.

Twice in the last few weeks, while sharing these wonderful places with visiting children, we’ve accidentally found some very interesting and mysterious creatures which are especially well-suited to live in our preserve.  Salamanders are very interesting amphibians which are quiet (unlike their froggy cousins), and mostly spend their lives hidden from view.  Like frogs and toads, salamanders are very sensitive to pollutants in their environment which can be absorbed through their skins, as well as changes to their habitat, meaning the composition of plants – both alive and dead – in their world.

The most common salamander at Woodland Dunes is the blue-spotted salamander, a black creature with light blue spots.  Like frogs, they emerge from their winter dormancy early in spring and migrate to ponds to breed and lay eggs.  Their eggs develop into larvae (which in frogs we call tadpoles), which have gills and exchange oxygen directly from water.  They change over time, growing larger and eventually absorbing their gills and becoming air-breathers.  After breeding, the adults leave the water to roam the forest floor as tiny predators in the leaf litter.  Their skin lacks scales and is moist (but not slimy), so they must in turn find moist places to live when the air is dry. Fortunately, a forest floor is covered with leaves, moss, and rotting wood, all of which can remain moist for a long time.

Another less common salamander here is the red-backed salamander. True to their name, they sport a reddish stripe on their back.  These amphibians don’t need water to reproduce – they mate and lay eggs in moist areas beneath rocks and logs.  The larvae have all the water they need within their eggs and complete their development there, hatching out in late summer as fully formed salamanders.  From there, they forage the forest in the same manner as many amphibians do.

Still less common is the four-toed salamander.  These tiny salamanders have, you guessed it, four toes on their hind legs instead of the five toes typical of other salamanders.  They look a lot like small red-backed salamanders, but the four toes is a giveaway.  They are considered a special concern species in Wisconsin, meaning that their populations could easily become threatened.  They have an even more interesting reproductive cycle with females laying eggs in moss, and the larvae mostly developing within the egg but hatching and traveling to nearby water to complete their larval development before leaving the water again for a terrestrial life.  The females may nest communally but may eat each other’s eggs. During the winter, they may retreat to burrows in the soil in the company of red-backed salamanders.  They require a forest floor with generous amounts of moss, but forage like other salamanders in higher areas.

There are other salamanders in our area- spotted and tiger salamanders (the latter seems to be decreasing in population), and also the eastern newt which is aquatic along with the mudpuppy, but the three species mentioned above have all been confirmed at Woodland Dunes.

Because they are so sensitive to environmental contamination, we are always glad to observe them, and if we encounter them with students as mentioned above, we are careful to put them back where we found them.  If you visit Woodland Dunes, please don’t dig around on the forest floor looking for them – they are too important to the forest and too precious to risk damage to them or to their homes.  Appreciate the fact that there are still places in which they can live if those places are protected and cared for.