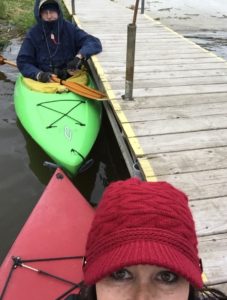 I had never heard the secrets of the West Twin river until I kayaked it Monday, May 23rd. Sumner Matteson, an avian ecologist from the Wisconsin DNR, and I kayaked the West Twin as part of the Great Wisconsin Birdathon (a fundraiser for the Natural Resources Foundation), and to create awareness around the developing canoe/kayak trail between the West and East Twin Rivers.

As I said, I’d never heard the secrets of the West Twin before, and I don’t think anyone fully has unless they’ve experience the river first-hand. But if you pay attention, she will share.

Matteson and I launched at 6:45 am (temperature – 49 degrees and a westerly wind of 18 miles per hour), but we dressed for the weather and paddled with anticipation for what was in store. Our trip began at the Shoto boat launch and ended at Vets Park, our goal – to find at least 40 different bird species by river.

My boss, Jim Knickelbine, wisely advised me to go upstream a bit and then head back down. He was right on the money. As we paddled north, we came upon a shrubby little cove that was filled with singing and buzzing migrating warblers. Wilson’s, Canada, Blue-winged, Chestnut-sided and more were flitting and bouncing on branches as we sat with binoculars focused. We also heard the beautiful upward-spiraling, flutelike song of the Swainson’s thrush. True to its nature, it stayed out of sight, but it was nice listening to the “flute” as we watched other birds move about.

Prior to reaching the cove, we spotted a dark mink galloping alongside the riverbank. I’m not sure what it was in search of or where it was going, but the sight of the bounding critter was a treat as we witnessed nature waking up on the waterfront. The West would end up revealing two minks that day.

On the International Scale of River Difficulty, the West is slower than a “class 1 – easy” river. So if extreme kayaking is your thing, give this scenic, meandering river a try just for a switch-up. There are no rapids, no obstructions or difficult maneuverings that need to be made. She’s built for a smooth ride. 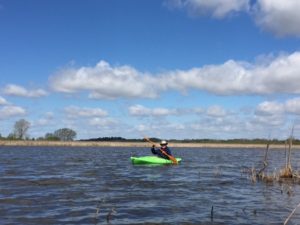 We criss-crossed our way to explore the marsh, grass cover, then forest habitats and were successful in finding Great Blue Heron, three of the four terns in Wisconsin (Common, Foresters and Caspian), spotted sandpipers, and a beautiful juvenile Bald Eagle who was nearly invisible until our kayaks were under the tree where it perched. We also discovered blue-winged teal, ruddy duck, green-winged teal, five types of sparrows and three types of wrens. And who could forget the two spotted fawns lying in the grass on the riverbank?

After five hours of kayaking on the West Twin, we had discovered 97 different bird species, well surpassing our goal. My partner feels the juvenile black-crowned night heron was the “bird of the day.” I argue that the yellow-bellied flycatcher was. But we both agree that the Eastern Meadowlark (a bird that is normally found in prairie areas), singing about a block east of Woodland Dunes in an urban area was a complete surprise, proving once again, nature is excitingly unpredictable. We also agree that the West Twin River has many more secrets to share and we can’t wait to get out there again to discover them.