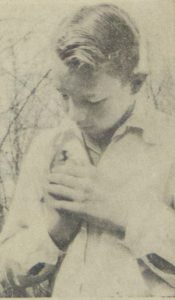 On May 14, from 8 til 11 am,  Woodland Dunes will celebrate the spring migration of birds, and honor International Migratory Bird Day, with it’s annual Bird Breakfast.  But in fact the breakfast was around long before there was a Woodland Dunes, and this year is a special anniversary.  It is also a testament to the appreciation of birds by people in this area.

As far as I can tell, Bird Breakfast began in 1941, and was started by Lillian Marsh and Merle Pickett, local birdwatchers.  Merle was a librarian at Washington Junior High in Manitowoc, and lifelong birdwatcher who engaged many young peoples’ interest in birds.  Lillian and Merle were also involved in the Roger Tory Peterson Bird Club here in town and organized a natural history education series.  As part of that they hosted a talk by Peterson, a noted ornithologist and artist, himself.

The first bird breakfasts were held at Lillian’s home.  She and Merle would invite friends to go birding and then join them after for breakfast.  The birding became a little competitive, with birders trying to see how many species they could find that morning.  A wonderful account of these breakfasts can be found in Dave Crehore’s book “Sweet and Sour Pie” which chronicles his growing up in Manitowoc.

Later, Bird Breakfast was hosted by St. Paul’s Methodist Church in town, and served as a fundraiser for them.  An interesting article from the Milwaukee Journal Women’s Section from May 1956 in the archives of the Wisconsin Society for Ornithology, describing the breakfast which was attended by 250 people that year.  The article also includes a number of photographs of the event.  The high total for species seen that year was by R.J. Rensink, who found 95 different kinds of birds that morning.

Sometime in the late 1970s Bird Breakfast moved to Woodland Dunes, and has been hosted by us ever since.  It’s not officially a competition or a fundraiser, but more a gathering of people who appreciate nature to celebrate the seasonal return of migratory birds.  Experienced birders lead walks to find birds and demonstrate bird banding, children engage in activities about birds, and a pancake breakfast is enjoyed by all.  This year, a new observatory shed for astronomy programs will be dedicated, and a visit to the restored wetland that was constructed in partnership with Wisconsin Public Service Corp. will take place.

For 75 years Bird Breakfast has been a part of the Manitowoc-Two Rivers community.  It is a wonderful tradition offered to anyone who enjoys nature- especially the birds around us.

photo- a young birder with a sora rail at Bird Breakfast in 1956, from the Milwaukee Journal.