Woodland Dunes seems to come alive this time of year, not only in terms of wildlife but, people as well.  One of the best aspects of working in a nature center is meeting people who are genuinely interested in living things and come to observe and learn rather than take for themselves.

Released from the bonds of winter, school children again come to visit and explore, guided by our naturalists, both staff and volunteer.   The sound of children so appropriately mingles with the calls of birds outside and fills the rooms inside, making the nature center seem complete.  Children can certainly learn about wildlife and natural resources in the classroom, but allowing them to experience nature with all their senses is, I think, more meaningful and the experience better retained in their memories.

A few days ago  I had the great pleasure of banding birds with a small group of middle school students who attend the Denmark Community School, a project-based learning school which is part of the Denmark School District.  This group has chosen bird study as one of their projects, and together we participate in bird counts and banding from time to time.

That morning we banded, hoping to catch some of the spring migrants that are moving through our area, and to re-capture some of the birds banded

and released previously.  We were banding in an area where a pileated woodpecker has been seen and the students were hoping we’d be able to band him, but of course that would be a very long shot.

We did band some migrants, like a white-crowned sparrow which had loads of fat stored to power its continued migration north into Canada.  And a chipping sparrow, one of many which has returned to this area in the last few weeks to sing from trees in our yards.  A a couple of downy woodpeckers and goldfinches also cooperated and now sport new aluminum jewelry on their legs (the students wondered if other birds are jealous).

The most interesting was a red-bellied woodpecker, so much larger than the other birds we banded.  His orange-red hood and black and white barring on the wings are very distinctive.  In the hand, we were able to carefully examine his stiff tail feathers, used to brace himself as he clings to tree trunks.  We could clearly see his barbed tongue, with which he spears insects under bark and in rotting wood.  Compared to the small songbirds, his scaly, dinosaur-like feet and claws were impressive, and strong enough to suspend a banding pliers which he refused to release.  Between those claws and his long bill, he was very good at communicating his disapproval of the banding process despite our good intentions, and drew blood from this bander’s fingers in several places- not the first time by any means.  After banding and recording wing length, fat reserves, sex and age, he was gently released and immediately flew to a nearby tree trunk from which he could scold us. 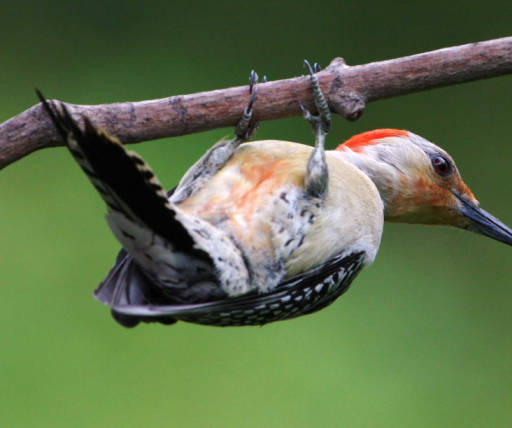 Red-bellied woodpecker in search of food 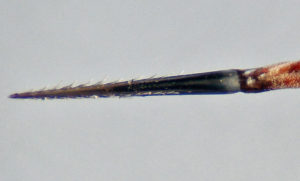 We hope that experiences like this kindle the fire of wonder in young people and give them just a taste of how much there is to be learned.  And teaches them to respect these precious living things that are our neighbors, and value them even if their benefit to us is not obvious.