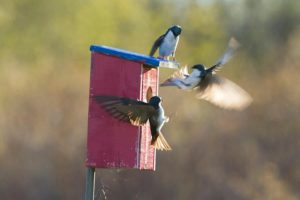 There is a typical, and justifiable tendency for living things to stake out territories.  A lot of that probably depends on the availability of resources- and not only animals but plants of many different kinds do it.  Plants try to crowd each other out, or poison the soil against other plants so they have enough room, soil, and nutrients to prosper.  And although many creatures find enough in their world to sustain themselves without worrying about their own space, many others do, including us.

This time of year, when reproduction is a high priority, territorial behavior is most noticeable.  When managing habitat for wildlife, it’s very helpful to know how large of a territory is required by a given species.  While a plant might need only a few square inches or feet, an animal that feeds on plants might need many square feet, or acres, or square miles in the case of large animals like deer.  Animals that in turn feed on those herbivores may need territories of miles to dozens of square miles or more in the case of top-tier predators like large raptors, felines, or canines.

A bird’s territory is often easier to observe and define.  As we look over the marsh we see red-winged blackbirds spaced at about an acre apart (on top the cattails), while the females are busy down among the stems. In shrubs and in the forest it’s the same- as the breeding season starts, birds space themselves out as if in an immense jigsaw puzzle of territories, which can be vertical as well as horizontal (some birds use areas in common with other species; some near the ground, some in the shrubs, and some in the tree-tops).

And then there are over-achievers.  Some birds don’t know when to quit, or what’s a real bird and what isn’t.  These birds won’t tolerate even their own reflection in their territory, and try over and over to get at a mystery bird in a window that just won’t leave.  I’ve had robins, orioles, cardinals, and catbirds do that at my home, and others have reported even bluebirds attacking their reflection.  Even female cardinals will sometimes do this.  Usually the behavior stops in a few weeks, but hanging streamers or doing something to lessen the reflectivity of the glass can help.

Even birds that one would think of as non-aggressive can be overwhelmed by the urge to defend territories in spring.  This week one of our staff observed an impressive tree swallow fight, as presumably one bird attempted to linger in the territory of another nesting pair.  The pair which claimed the territory around their nest box repeatedly attacked the intruder to the point of driving it to the ground, scratching and biting.  It’s hard to imagine these beautiful birds being so hostile, but it’s a matter of the highest importance to them that they provide adequately for their future young.  They need to reproduce successfully, and pass their genes along to future generations, and this may be their only chance to do so.  Most swallows, like purple martins, barn, cliff, bank, and rough-winged that we have around here, nest in colonies.  Tree swallows; however, need their space and will fight to keep it.  Sometimes they become “super-territorial” and will defend nest boxes they aren’t even using themselves.

Birds have been around a long time, and their territorial nature is part of their behavioral legacy.  It works for them, and provides for us another fascinating aspect of nature to appreciate.

-Photo of tree swallows arguing over a nest box at Woodland Dunes by Nancy Nabak.