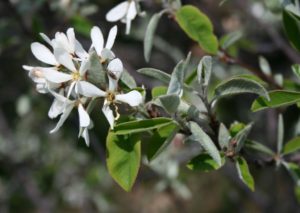 Memorial Day is upon us, a time of remembrance and reflection about people that have passed, especially those who sacrificed their lives for our country.  Across our nation there are services commemorating those people.  Often flowers are a part of those services, placed on graves and at monuments, a gift of something that is precious.

Imagine years ago, when people didn’t have access to florists or trans-global floral shipping.  The beauty of flowers, especially early in spring, must have been considered something of great value.  Amelanchier, or serviceberry, was one of those.  Its flowers can be seen on small trees at the edge of the forest throughout our area now.

Where does this plant get its name?  There are many stories- because it blooms early, it was said to have been used in Memorial Day services in years past.  Or for funerals for people that passed away during winter who’s remains could not be buried until the ground thawed in the spring (this is apparently more a romantic notion than fact).  It bears fruit in June, so Juneberry makes sense, and it blooms at the time when shad are returning to rivers to spawn in the East, so shadbush also seems logical.  It was a very important plant to Native People, who preserved the berries they gathered and also used them to make pemmican.  They called it misaskwatoomina, which was shortened to Saskatoon and became not only the name of a bush but a major city.

Whatever the name, Amelanchier is an interesting plant whose reddish young leaves and gangly white flowers add beauty to spring woodlands, and provide a wonderful food source for birds and people lucky enough to find the berries before birds do.  They are hardy and can be planted in our yards to improve them for wildlife, and we are using them extensively for restoration plantings at Woodland Dunes where they are found growing in the wild.  Deer like to browse on them, so they may have to be protected when young, but the result is worth the effort. 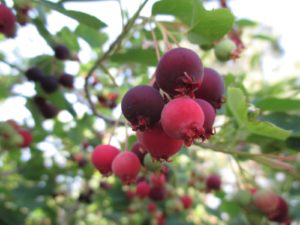