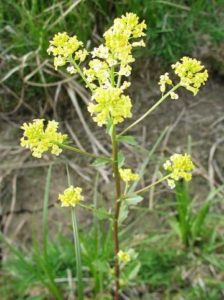 When one thinks of spring, baseball comes to mind.  And while watching baseball one must enjoy a hotdog, which requires mustard, of course.  In a different sense, however, spring is the time of year when mustard seems to rule the world.  This large and successful family of plants, the Brassicaceae, are blooming all around us- many different species including some which are not at all mustard-like.

The yellow mustard we eat is made from the ground seeds of a mustard plant Sinapis alba originally found in the Mediterranean.  It has been used as a condiment for a very long time. And In that time, the plant has also moved to many places beyond it’s native range, as seems typical for plants in this family.

In our neck of the woods, there are at least three wandering mustard species, non-native and invasive, which either vex or delight us, depending on our point of view.

Lets start with an old favorite, or rather nemesis, of farmers- common winter cress (or yellow rocket)- Barbarea vulgaris.  This was one of the first plants taught to students during my plant taxonomy classes in school, probably because it is so frequently seen and despised.  Each year in spring, winter cress erupts in masses of yellow on areas of disturbed soil, such as plowed fields.  It quickly grows a couple of feet high, then produces masses of small yellow 4- petaled flowers which in turn produce slender pods of classic tiny mustard seeds.  Winter cress is an annual plant, producing a new generation each year.  It colonizes disturbed ground, and seems to die off as other perennial plants take over.  The tenacity of those little seeds comes to light if in the future the site is again disturbed- for once again they burst forth after years of dormant sleep.  Pulling mustard in farm fields has long been a spring ritual, and I wonder how many millions of tons of mustard has been pulled by farm children over the years. 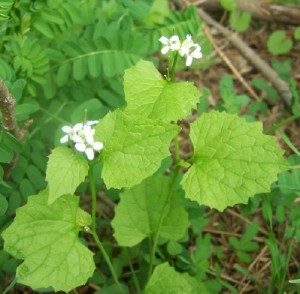 A more recent addition to our landscape, and a more intentional one, is garlic mustard.  This edible plant which traditionally grows almost unnoticed among hedgerows in Europe, was brought here more than a hundred years ago but was not at all satisfied with confinement to the garden.  Without native insects to dine on it, garlic mustard spreads almost uncontrollably across the landscape including shady woodlands.  There it bullies our native wildflowers and usually overwhelms them.  Instead of the yellow flowers of winter cress, garlic mustard has tiny white blooms and slender seed pods.  It was found nowhere around here when I was young, but appeared about 30 or so years ago.  To our great disappointment, this year we found a patch across the road from Woodland Dunes’ preserve on Columbus St.  That patch was pulled and the plants removed, and we will keep watching the site.  I would expect this will only be the beginning of what will become a long battle to manage the vigorous invasive.

A third invasive mustard is Hesperis or Dame’s Rocket.  The flowers are still four-petaled, but are a lovely purple to lavender to white color.  Like the other mustards, they burst into bloom this time of year, but their beauty often causes people to leave them be until it becomes apparent that they want to take over the world.  Like garlic mustard, dame’s rocket is not an annual, but a biennial, meaning that its seeds first germinate and become a plant that consists of a low rosette of leaves for a year which produce and store energy for the blooms produced in its second year.  Control of such biennials requires a multi-year strategy that often involves pulling flowering plants and carefully herbiciding or otherwise removing first year plants.  To top it all off, those tiny little mustard seeds can survive for years in the soil, so even if plants are removed, additional seeds can germinate for years to come especially if there is disturbance, or a lack of native plants.

Dame’s rocket is not phlox, which is a five petaled light blue native flower. Like the other mustards, Dame’s rocket has flowers with four petals which can range from white to lavender to pinkish-purple.  Despite it’s lovely color, beware this beauty lest it take your yard and woodland from you. 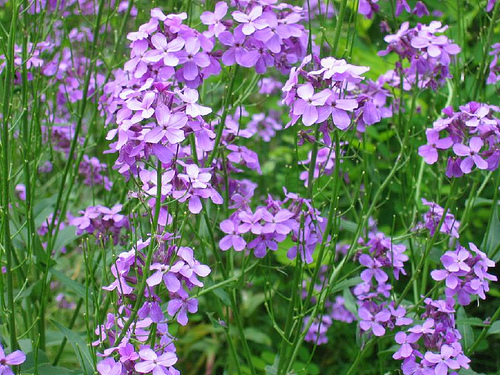