Taking a break from the busyness of everyday life and spending time with nature is good for the soul.  On a recent outing with friends, I was able to observe nature up close and personal.  In order to achieve this, we were up way before the sun.

We sneaked out to the edge of a woodlot, positioned our backs against tree trunks for support, and settled in.  As my eyes adjusted, a snipe could be seen flying back and forth in front of me, low over the adjacent field. The morning became louder as the sun slowly increased the brightness in the sky.  Chickadees, common yellow throats, ovenbirds, robins, and many other song birds became increasingly louder and louder until the field was fully lit, and then at the same pace became increasingly quieter and quieter with the full brightness of the morning sun.

A combination of complete stillness and being dressed in full camouflage made us seemingly invisible to the creatures around us.  I watched with content as a spider dropped down from a branch high up in the beech tree ahead of me and to my left.  Careful not to break its silk string, it gently landed on a leaf before climbing back up to the branch.  After doing this several times, it ventured to the right, and found another branch to connect to.  Soon it was making the careful almost circular shape between the main supports that we recognize as a spider web.

A chickadee flitted around us.  Soon I heard a strange noise to my left.  I dared not move, as doing so may have frightened our visitor away.  Slowly it made a circle around us, staying about 10 feet away.  This curious little grouse, with its sharp eyesight, was checking us out.  It clearly did not view us as a threat, as it slowly and quietly moved on. 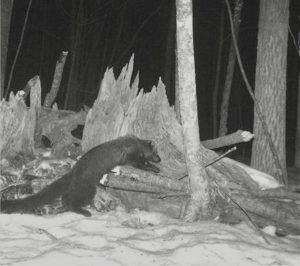 A short while later, something large crashed into the forest from the field.  As it streaked past my left, I turned in time to see a very impressive looking fisher.  I pondered for a moment if it somehow knew about the grouse.  As quickly as it had appeared, it was gone into the forest, still in pursuit.

All of this excitement happened in the matter of just a couple of hours, while I would have normally still been sleeping.  After failing to call in any turkeys, we moved on and took a different approach.

From there we hiked miles of trails, known to my friends as potential turkey habitat. We saw turkey tracks, as well as some wolf tracks and scat.  Our adventures took as past 4-foot-tall ferns and many white trilliums in bloom. One random dandelion out in the middle of the forest left me perplexed as to its origin.  How did one dandelion seed get deposited way out there?  There was one sad note to our trek, we found a crushed turtle.  What would have stepped on the turtle way out there?  And what were those black beetles with yellow heads crawling all over it?  Although my education told me this was a carrion beetle, I snapped a photo to research later.  My research confirmed that they were American carrion beetles.

All in all, a day spent outdoors is good for the body, mind, and soul.