One of the highlights of the year for us are the summer bird surveys which take place in the Woodland Dunes preserve. Woodland Dunes was begun as a result of the very special Great Lakes Ridge and Swale habitat found in the forest here, which provides for a rich variety of plant species which in turn provide nesting habitat for hundreds of species of animals. About 100 different species of birds nest and raise their young at Woodland Dunes, but the exact composition of that population varies from year to year. Beginning on about June 10 and for the following couple of weeks, we discover anew which birds have chosen to continue their lineage by making a summer home here to raise their young. 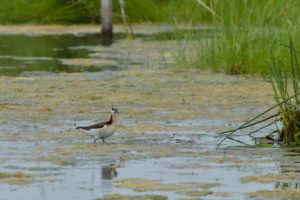 Because trees and shrubs are abundantly adorned with leaves it is difficult to see birds in the forest in summer. Fortunately, and perhaps because of that, birds communicate their presence and intentions by singing. Even if we can’t see the birds, we can still record the ones we hear, and our summer surveys are done by walking to a designated point in the preserve, and recording all birds either seen or heard during a 10-minute period.

Birds tend to sing more in the early morning, so survey points are monitored between sunrise and about 9 am. Incidental observations made at other times are also recorded.

It is not always easy getting up early in summer, and I admire people who do so every day. Out in the forest, however, the world seems almost magical. Lush green growth all around punctuated by tiny wildflowers with a background of singing birds (and a few humming mosquitoes) makes the effort to rise early worthwhile. We walk quietly from point to point, usually several hundred yards between stops. Phone apps now make documenting birds and the effort to survey them easy, and results can be sent to a global bird database from the field- quite an improvement from the stacks of field notes we used to have to compile back at the office.

The best part, however, is the mystery of discovering which birds are present at each point. Many people think of warblers as visiting our area during spring and fall migration periods on their way to and from the far north, but in reality many northern birds are enticed by the plants they typically see in Canada which grow here thanks to the cooling effect of Lake Michigan. That habitat, and the abundant insect population residing in the forest make for suitable nesting conditions for many of those northern birds. At Woodland Dunes so far this summer we have found more than 80 species, including winter wrens, white-throated sparrows, and ten of the warblers including mourning and chestnut-sided, often northern residents. In the open fields planted with prairie grasses and wildflowers we’ve found savannah sparrows, dickcissels, bobolinks, and meadowlarks, while in the wet spots blue-winged teal, spotted sandpipers, and Wilson’s phalaropes have been found. The marsh is alive with red-winged blackbirds, swamp sparrows, marsh wrens, and Virginia rails.

Each of these birds is special, and giving them a place to nest and continue their species’ existence makes us feel that what we do is worthwhile. This time of year, experiencing the early morning life of the preserve, I appreciate more than ever the foresight of the people who founded Woodland Dunes, realizing what a rich and meaningful place it is, and how reassuring that if you preserve native habitat and try to maintain it, the birds and other wildlife will find it.

In another couple of weeks there will be more time for sleep. For now, experiencing the forest and the birds which live here justifies a few extra yawns during the day. Nothing another cup of coffee can’t fix.

photo: an unusual sighting of a Wilson’s phalarope at Woodland Dunes, taken by Nancy Nabak