↓
Home Menu ↓
Skip to primary content
Skip to secondary content
During our summer work in the preserve, surveying wildlife or restoring habitat, we try to be aware of the creatures and plants which reside here.  We don’t regard them as curiosities- they are living beings and we are in their home.  Even if we’ve heard a wood thrush or red-shouldered hawk a hundred times, we still remind ourselves how special they are, and how fortunate we are to have them as our neighbors.
One of those residents which people are often surprised to meet are the orchids.  Most of us think of orchids as exotic tropical plants grown in a greenhouse and on windowsills, but they are a large, varied, and successful family of plants with several wild members growing in forests in our region.  Worldwide there are about 28,000 species of orchids, making them one of the largest families of flowering plants in existence.  They are often colorful and fragrant making them popular subjects for domestication.  In the forest here we find a variety of orchid types- from lady’s tresses to purple fringed orchid to coralroot and a few pink ladyslippers.  In some cases it’s rare to find a flower, though, because deer like to graze on the blooms.
There is even an invasive orchid- the helleborine orchid (Epipactis helleborine), which has escaped from home gardens into 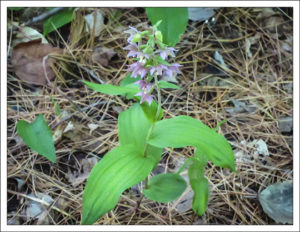 the forest.  Its native range is from Portugal to northern Africa east to China.  It is a perennial plant which grows from 1-3 feet tall and has broad leaves and spikes of irregular flowers typical of the orchids.  Fortunately, it spreads rather slowly, and often doesn’t grow in dense colonies, rather appearing here and there in a forest, especially near footpaths- I suspect shoes help to spread it’s seeds.
Helleborine orchids are very attractive to pollinators- they secrete a sweet nectar enjoyed by wasps, flies, and bees.  They depend on these insects to pollinate their flowers, allowing them to produce large numbers of seeds, through which they colonize areas disturbed by people.  In order to germinate, those seeds require help from fungi in the soil- any of several different groups of symbiotic organisms.      Unlike some other invasive plants, helleborine orchids don’t seem to overwhelm forest areas- as I mentioned they seem to present a few plants in places where there has been disturbance, such as paths, around buildings, or roadsides.  Because they are perennial and not too dense in their growing habit, they can be controlled by simply pulling them out, rather than requiring herbicide or more extensive mechanical controls.
If you happen to come across the hellborine orchid, you are seeing a plant which is as much at home here as it is in parks in places like London, Moscow, or San Francisco.  It is an interesting addition to our local flora, and an example of how we humans affect the environment wherever we travel.
photo- Helleborine orchid from Paul Smith’s College Visitor Interpretive Center