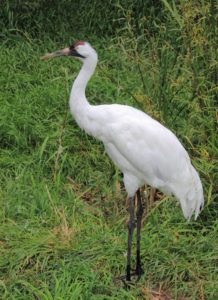 Recently a whooping crane was spotted in Manitowoc County with a group of sandhill cranes; it stood out in contrast with its stark white feathers. Seeing this beautiful bird for the first time in the wild sparked my interest. Why do we see so many sandhill cranes, but not whooping cranes?

Whooping cranes are actually the tallest birds in North America with a height of about five feet! The one that we spotted was easy to find due to its entirely white body. The only coloration is the black tips of their wings and a bright red patch on their head. Whooping cranes are omnivores eating crustaceans, fish, insects, grains, and plants. Their habitat includes marshes, wetlands, fields, wet prairies, and mud flats.

The whooping crane almost went extinct with only 15 birds in 1941, but with the help of scientists their numbers slowly rose. Today they are still considered a critically endangered species and can be spotted in Wisconsin during the breeding season. Whooping cranes originally had high numbers which then dropped due to habitat loss and high hunting rates. The 15 original whooping cranes were a part of the largest and only natural migratory flock that travels from Canada to Texas every year. There are two more flocks, the non-migratory flock in which the cranes were reintroduced into Florida, but then never learned to migrate, and the non-natural migratory flock which just so happens to be found in Wisconsin.

Scientists decided that because the cranes were reintroduced in Florida, they did not know how to migrate to the North during the breeding season. Therefore, the cranes were trained to follow a plane North to Wisconsin every year where they breed at Necedah National Wildlife Refuge and then South every winter at Chassahowitzka National Wildlife Refuge in Florida. The one that we spotted in Manitowoc County, might have wandered off from the migrating flock and found it’s way here. The current flock that travels to Wisconsin every year has a population of 102.

There is hope for the whooping crane and their numbers are slowly rising. The International Crane Foundation located in Baraboo, Wisconsin is part of the reintroduction program in the United States. They currently have thirty whooping cranes in captivity. These captive cranes give birth to about ten to twenty chicks a year and most are introduced into the wild. Many of the chicks at the International Crane Foundation are actually raised by humans. Their human caretakers must wear whooping crane costumes so that the chicks do not become attached to humans and are able to survive in the wild once they are reintroduced.

The preservation and protection of whooping cranes is very important. If you spot one in  the wild make sure that you keep a distance of at least 200 yards. Keep quiet and concealed so that the bird does not see you. And most importantly, do not attempt to feed them; this can lessen their fear of humans and increase their chances of death.