↓
Home Menu ↓
Skip to primary content
Skip to secondary content
In summer we think of prairie wildflowers, birds scurrying to feed their young, Cicadas singing in the trees, fishing for crappies, biking along the Lake, and more wonderful aspects and activities suited to warm weather.  Fireflies dot the nighttime fields, and mosquitoes feast on us while we chase them.  The big mulberry tree at Woodland Dunes bears tons of fruit which the cedar waxwings wait for and eat, and then deposit purple calling cards all over the deck.  I really enjoy paddling in the summer, lazily exploring familiar streams until I’m well-backed.  My dad bought a canoe for the family 50 years ago, and I still use it.
Out on the water, one finds kingfishers, now teaching their young to fish, spotted sandpipers, herons, ducks and geese, and 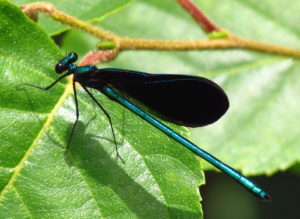 many insects.  Mosquitoes hide from the strong sun during the day, but there are other insects darting over the water such as dragonflies.  I have always enjoyed watching dragonflies and the smaller damselflies, I enjoy them, but I can’t claim to be good at identifying them- they don’t often sit still long enough.  It takes a lot of skill and the right equipment to photograph them clearly- mine are usually a blurr.  But they are another of the beautiful and beneficial insects that cohabit this place with us.
According to the Wisconsin Dragonfly Society (a wonderful organization with a great Facebook page), Fifty-two species of dragonflies, damselflies, and others have been recorded in Manitowoc County thus far.  There are certainly more, but there are limited numbers of people with the expertise to identify them accurately.
There are a number of families- darners, skimmers, clubtails, spreadwings, pond damsels, broad-winged damsels, emeralds, baskettails, meadowhawks- so much variety.  Some are common, like the familiar common green darner, and some are rare like the Hine’s emerald.  Some are moving north as the climate warms, like the southern spreadwing.  Some are migratory, and others are annual.
Common green darners are large and robust.  They are migratory, heading to the southern US in the fall.  They, like birds, follow the lake when they migrate. In a month or so, we will see thousands at a time cruising over meadows near the shore in the same direction or hunting smaller insects in a zig-zag pattern.  They lay eggs in water down south, and their offspring return here in spring, even though no one showed them the way.  Others spend the winter underwater as nymphs, ready to hatch next spring or summer.  They are not as active when it is cloudy, but when the sun shines they are suddenly everywhere over water, ready to mate and lay eggs.  They are very competitive, and males guard females after mating, to prevent another male from coming in, removing the sperm from the first male, and depositing their own.  Eggs are laid in the water, hatching into nymphs.  They don’t undergo complete metamorphosis like many other insects- their cycle is egg, nymph (which grows), and adult.  The nymphs are fierce predators underwater, feeding on anything smaller than they are.  Large dragonfly nymphs can even catch and consume minnows, which is ironic because fish also eat the nymphs, and we use them for fish bait.
Adults on the wing are just as fierce- continually eating other insects during the day, and resting at night.  They probably eat more mosquitoes than birds and bats combined, as they are adept at catching small flying insects.  Even though it wanders through a marsh, you will seldom encounter mosquitoes on Cattail Trail at Woodland Dunes- I choose to believe this is because there are so many dragon and damselflies.
One morning several years ago, I went out into our preserve with a dragonfly expert.  In about an hour we had found 18 species, including that rare Southern Spreadwing.  The diversity was wonderful.
After green darners migrate, there are fewer and fewer dragonflies here.  One of my favorites is the autumn meadowhawk, a small red dragonfly that prefers fields- I have seen them into November some years, hardy little souls.  The rest are beneath the waves living a nymphy winter.  Right now is an excellent time to look for dragonflies. At the ponds near our headquarters we’ve recently seen darners, marsh bluets, twelve-spotted skimmers, common whitetails, widow skimmers, red saddlebags, Halloween pennants, widow skimmers, and others.
My all time favorite is a delicate damselfly called the ebony jewelwing.  They live near small streams, have black wings and emerald green iridescent bodies.  Their wings are large, and they fly like a butterfly.  I am very grateful every time I see one, just to have the opportunity.
I hope the rest of your summer is filled with many dragonflies and other natural beauties.
Photo- ebony jewelwing By D. Gordon E. Robertson – Own work, CC BY-SA 3.0, https://commons.wikimedia.org/w/index.php?curid=15751897