Have you ever been walking in your garden and noticed what appears to be bubbles on your plants? It may appear as if the plants are salivating, but these bubbles do not come from the plants. They come from an insect called a spittlebug or froghopper. This bug gets its name based on the nymph stage and adult stage of its life cycle. In the Midwest, the most common spittlebug is the meadow spittlebug Philaenus spumarius, and it is frequently seen here around Woodland Dunes.

The froghopper nymph is more well-known than the adult because the nymph is what creates the bubbles on the plant. The nymph, called a spittlebug, stands head down and pierces the plant’s stem in order to suck a plethora of the plant’s juice which is the spittlebug’s food. The spittlebug then excretes the remaining plant juice as urine through its rear end and creates a frothy substance called spittle which looks like bubbles. Plant juice consists mostly of water and is not very nutritious. Therefore, a spittlebug must drink copious amounts of plant juice in order to obtain nutrients. In fact, a spittlebug excretes approximately 150-280 times its body mass in urine every day. 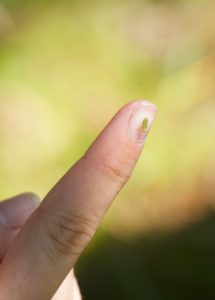 When the nymph is ready to become an adult, it creates one big bubble to live in, just like its emergency bubble. The spittlebug continues its instar period of development in the bubble as it molts until it becomes an adult and coins the term of froghopper. The froghopper is no longer able to produce spittle to protect itself; thus, it must hop like a frog away from predators to prevent being eaten. In September or October, the female froghoppers will lay eggs on plants or in plant debris. The eggs will live there until late April or Early May when they hatch as spittlebugs and begin forming their spit cocoons.

Although many people worry that these bugs are a pest to plants, they really do no harm. Neither the spittlebugs nor the froghoppers do damage to the plants. They show up in small numbers and are only on the plants for a short time to grow into adults. So, when you are walking through your garden or a grassy area, you can stop and marvel at the bugs that live in spit.