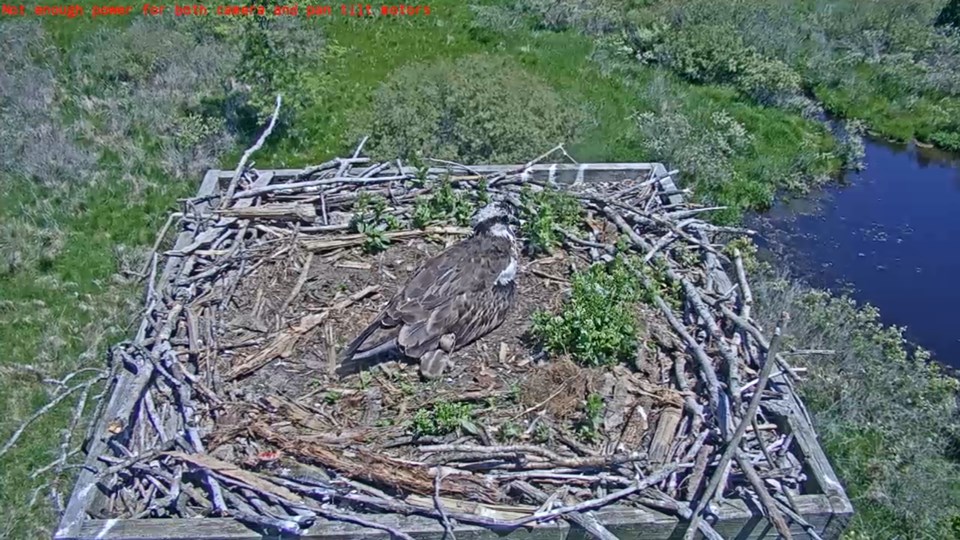 This year has been difficult for ospreys at Woodland Dunes.  It’s a reminder that the natural world is not always as friendly to animals as was portrayed in cute nature films I watched when young. Neither is nature cruel, though. It’s just that a lot happens in the wild every day, sometimes to the benefit of animals, and other times not.
Each year we look forward to the return of ospreys to our preserve and they arrive pretty reliably the first week in April each spring. I believe we’ve had them here for about 20 years now. They quickly mate, spruce up their nests, and in a couple of weeks lay eggs. In the nest closest to our office, on a platform about 50 feet off the ground, two eggs were produced, and a month later one of them hatched. The second egg did not, so it appeared that we would watch an only child being raised throughout the summer.
We assumed he or she would receive exceptional care from its parents. This didn’t appear to be the case, however. After a week or so the male seemed to visit less frequently. Then someone noticed that the chick was no longer visible in the nest on our webcam.  We decided to search the area around the nest pole, and sure enough found the fallen chick, which was lucky to have avoided my big feet trampling the grass. Our land manager, Jeni, gathered the chick and took it to our friends at Wildlife of Wisconsin who are licensed wildlife rehabilitators. WOW examined the bird, and then cared for it (meaning feedings every two hours) while a foster family was sought. Because there appeared to be some question about the parenting ability of the adult birds here, an attempt was made to place the bird in a nest at Vietnam Veterans Park in Two Rivers. Two Rivers Water and Light generously assisted with a lift truck, but when they went up it was discovered that the nest already had three chicks much larger than ours. That scenario would not bode well for our little chick, as baby raptors are very competitive. So back to WOW the chick went for another week.
Then a nest was located in Berlin which had one chick of similar size, potentially a good match. WOW transported the bird down to Berlin and with help from other volunteers, was able to place the bird in its new home. We have not heard further about the bird and his foster family yet, but we are hopeful.
Unfortunately, last week, we were told that there was an osprey on the ground across the street from our office. Sure enough, a beautiful female bird, a full adult, was alert but motionless on the grass, its right wing drooping.  Again, we called Wildlife of Wisconsin, who came and took the bird, which was examined and x-rayed. Its wing was not broken, and they began the process of rehabilitation. Unfortunately, despite excellent care, the bird passed away for unknown reasons.  We don’t know how long it had been on the ground or what other problems, such as infection, might have been happening, or how it was injured.  Sometimes things just don’t work out despite our best intentions.
I think what is important to remember is that first, life is hard for wild animals, and we need to recognize that.  And try not to make it harder for them than it is already. If we are aware of what they go through, we will likely appreciate them more.  Second, there are wonderfully compassionate people like Wildlife of Wisconsin, who give a lot of themselves to help wildlife.  Such organizations are usually non-profit and self funded, and deserve support. Our nature center has referred hundreds of people who have encountered injured or orphaned animals to them. Without them, many wild animals would suffer needlessly or perish. They are important allies in caring for and educating about wildlife.
photo- mom and osprey chick at Woodland Dunes in June