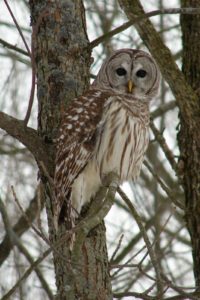 One of the very first bird calls that I ever learned was the famous “Who Cooks for you? Who cooks for you-all?” call. Those 8-9 notes are very recognizable if you know what to listen for, and those notes compose the call of the Barred Owl. When I was little, my grandparents and I would walk around our forested property late at night and I would belt out my rendition of the barred owl call… much to the horror of all of the local wildlife and neighbors. Occasionally there would be one bold enough to call back, which probably only fueled the idea that I was actually talking to them. If we were walking around very quietly the owls could be heard calling out into the darkness “Who cooks for you? Who cooks for you all?” but when you are little, being quiet is a pretty hard task when you think that you can talk to owls.

Now obviously I was quite the imaginative child (let’s be honest, not much has really changed) but I did believe a common misconception about barred owls and owls in general that I just recently found out to be untrue. We were out planting trees and all of a sudden from the forest next to us was the call of a barred owl. At 9 AM! How weird right? Aren’t owls supposed to be nocturnal (more active at night)? Well, after doing some quick research, it turns out that they are actually considered more of a crepuscular species (meaning that they are active during twilight – dawn and dusk) and during the time of the year that they are raising their owlets they are even more active during the day (diurnal).

Given that new information it wasn’t actually that weird to be hearing them call during the morning hours. Since that first time hearing them out in the woods we have heard them call at least twice a week. Thus we are assuming they are nesting around where we are planting. We have even found barred owl feathers close to where we hear them call. How neat!

Barred owls often nest in heavily wooded areas with only scattered clearings near swampy areas. Where we are planting (out in the swales) there are big clearings dominated by skunk cabbage surrounded by dense woodlands of varying tree species. In that area there is also no shortage of “yummy” food for the owls to eat. Each time we take a step it sends dozens of frogs and toads scattering for cover under the skunk cabbage. There are also squirrels, rabbits, mice, reptiles, amphibians – like the frogs and toads, etc. that the barred owls would love to munch on. It’s no wonder those owls are there, it truly seems to be the perfect habitat!

If I could go back and tell my younger self that in my future career I would be out working in the woods and hear the owl call that I grew up to know so well, and get to still call back to it… I would have been so excited! Owl whisperer-ing aside, it is super cool knowing that there are owls around us as we are out planting trees, and even more awesome knowing that those trees that we are planting could be home to future owl populations once they are bigger. So, if you are out in the woods here at Woodland Dunes and you hear that famous “who cooks for you?” call during the day, you know it can indeed be an owl and which one it is. And if you hear a very bad rendition of that same call following it, well, you probably know who is making that call too.