One of the highlights of my internship at Woodland Dunes this summer has been the summer camps, especially the recent Little Wings Exploring Water camp. Each of the summer camps have been extremely fun and fulfilling, but the combination of weather and seven eager campers made this particular day one of my favorites.

The night before camp, Two Rivers had just received about five inches of rain. When Jessica Johnsrud and I arrived early the morning of camp to survey the area around the Nature Center, we were met with extremely high water levels in the pond and on the beginning of Willow Trail.

We intended to have the campers dip for pond critters on a small dock off of Cattail Trail, but the inclement weather from the previous night made it difficult and dangerous for four- to- six-year olds to pond dip; therefore, we had to improvise. Taking a look around the corner at Willow Trail, there was about six inches of water that had risen above the normal water level of the small creek that runs perpendicular to the trail, which sparked an idea. Instead of pond dipping, we would teach the kids how to navigate across a small creek! 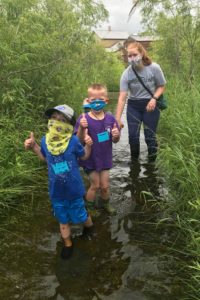 When the beginning of camp rolled around, our seven happy campers walked in with rainboots and stories of the storm from last night. We started off by introducing some fun water experiments to help understand the properties of water, which included counting the number of water droplets we could drop on a penny and painting with watercolors on frozen watercolor paper. Along with each painting came intricate background stories of planets, spiders, and other imaginative tales only four to six-year olds could fabricate out of watercolors.

With the overcast sky and a slight mist above us, we took a break from sitting to hike a portion of Cattail Trail, where we listened and called for red-winged blackbirds with their signature call that sounds like “vote for me!” We also couldn’t help but call back to the green frogs as we passed and marveled at the floating duckweed.

Following a snack of watermelon, appropriate for a water-themed day, we were ready to get our feet wet. Carefully, we shuffled our feet through inches of water. As we trudged further, shrieks and laughter filled the air when the water eventually flowed into our rain boots. Once we cleared the creek, leaping leopard frogs caught the attention of the campers. To end the morning, an inventive game involving a sopping sponge of water titled “drip, drip, drop,” formerly known as “duck, duck, goose,” ensured that no one would leave with a dry head!

Despite an initial plan for the Little Wings Exploring Water camp, the rainy weather made this camp unique in the essence of nature working in our favor to literally explore water with the campers.This day reminded me that careful plans can easily be tossed aside and replaced with an even more immersive and memorable experience.