This past spring, rocks just outside of my window became a jungle gym for nine furry friends. 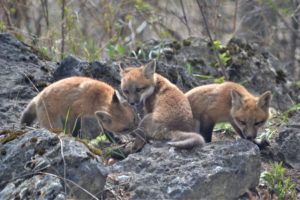 I am usually at college during this bountiful season; however, due to the COVID-19 pandemic, I was to continue my education online from the makeshift school desk of a spare room in my house. If you readers are anything like me, you probably get tired of looking at a screen all day and need a break from the constant glow of blue light emitted from laptops or phones. In between my obligations of classwork, I would sit in my living room and watch the occasional bird fly by or wandering squirrel. During one particular screen-break, my dad and I saw an adult red fox lapping up water from the bird bath. We didn’t think much of it at the time because our backyard is a common stomping ground for many animals like white-tailed deer, woodchucks, skunks, turkeys, squirrels, and other woodland creatures.

A week after the first encounter, I was looking outside of my bedroom window and I saw an adult fox on a pile of rocks, only this time it was not alone! The red fox was accompanied by three small fox kits, young enough to still have their brown fur. Red foxes are actually born with a brown or gray coat and once they reach at least a month old, their coat will turn the recognizable red.

My house happens to sit on a ridge of massive rocks, which give rise to many cracks and spaces for wildlife to live. While watching the foxes outside of my window, I noticed that they utilized a pile of rocks and connecting cracks as a den for the season. Foxes typically dig out their own tunnels for their burrow; however, they can use preexisting structures like rock piles.

Throughout the spring, I continued to check outside of my house windows for any signs of foxes. Foxes are primarily nocturnal, therefore, I would usually see more activity at dusk than midday. One early morning, I saw nine kits crawling and chasing each other on the rocks.

While my classes were wrapping up in early May, the young kits had finally grown into their red fur coats and were still hanging around their den. They were still very active and pouncing on each other; however, it wasn’t long until the foxes moved on and vacated the area.

Only 3 weeks ago did I see a fox reappear in my backyard! It did not look old enough to be an adult so it must be from the litter that had lived next door. Every couple of days, I would happen to see a fox or two napping on a rock, playing with an old bone, and dragging a rabbit across my backyard.

It was very exciting to see wildlife prosper outside of my own windows. It is easy to forget about our natural neighbors while so much is going on around us, but I hope to continue to take time out of my day to observe the outdoors.

For a time where everything was put on hold in the world, it was refreshing to see a fox family grow and continue on without pause.