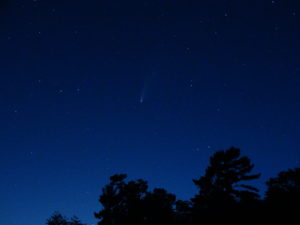 The night sky has always fascinated me. The infinite black blanket of glittering stars and shining planets remind me that the universe is a lot wider and vast than I think. A summer pastime of mine is looking up at the stars and outlining constellations. This summer, my view has been augmented by the appearance of C/2020 F3, or Comet NEOWISE.

A comet’s name typically originates from the discoverer, which could either be a person or spacecraft, and in the case of Comet NEOWISE, it was detected by NASA’s Near-Earth Object Wide-field Infrared Survey Explorer (NEOWISE) mission. The comet’s proximity to the sun alerted the NEOWISE mission on March 27, 2020.

Comet NEOWISE has temporarily graced our sky with its presence.  My geology professor imaginatively refers to comets as “dirty snowballs with tails” and that is a rather accurate way to describe them. Comets essentially are a combination of various matter such as frozen gases, rock, dust, and ice forged as a result of the formation of our solar system. These frozen snowballs follow an orbit, similar to planets, but are more elliptical in shape. When a comet approaches the sun, it heats up and causes some of the dust and ice to cascade behind and form a tail that can stretch on for millions of miles.

While gliding in a pontoon boat along the West Twin River on a bat survey in mid-July, I had the opportunity to see Comet NEOWISE in its element. Comets can be difficult to perceive with the naked eye depending on how far away it is from Earth, but luckily skywatchers of the Northern Hemisphere have the ability to watch for Comet NEOWISE as it makes its way through our solar system. Interestingly, it will not be visible from Earth for another 6,766 years!

While Comet NEOWISE is visible in our area, I highly recommend taking a step outside and scanning the night sky at approximately 10:00pm. I have found the most success standing in places with less or shorter trees because the comet tends to hang low in the sky. It is also beneficial to gaze in a spot that is free from light. The best way to find Comet NEOWISE is to first locate the big dipper in the sky. With the big dipper in sight, look to the right and below the point of the big dipper, this is where Comet NEOWISE resides. It may be difficult to see with just your eyes, but if you don’t look directly at the comet, your eyes should adjust until you can focus on the bright light followed by a dim tail. For an even better view of the comet, try using binoculars or a camera lens to capture it.

Don’t miss out on this once in a lifetime opportunity to witness Comet NEOWISE in its orbit!