Almost any avid nature enthusiasts will tell you that every trip into the woods can be an adventure. Any adventure can also turn into an opportunity to learn. My trips into the woods as a land management intern are no exception.

At the start of the summer, my coworkers and I noticed some blue-green colored logs along our route. They were in various stages of rot as is expected of wood on a damp forest floor. However, all our subjects of interest blatantly featured the same exact blue-green shade. We saw this coloration in patches on wood such as cedar and birch that would not normally be that color even as they deteriorated. We were left to wonder, is the discolored wood a natural phenomenon, or is it the left-over spray paint of an aggressive trail blazer from ages past? On one hand, it seemed present only on dead trees, which led half of us to think that it had to do with the decomposition of the wood. On the other hand, the sparse distribution of the discoloration throughout the woods led the other half us to believe that it was the result of anthropogenic forces.

There was only one way to settle the ongoing debate. When in doubt, research it out. We soon learned that Chlorociboria, or 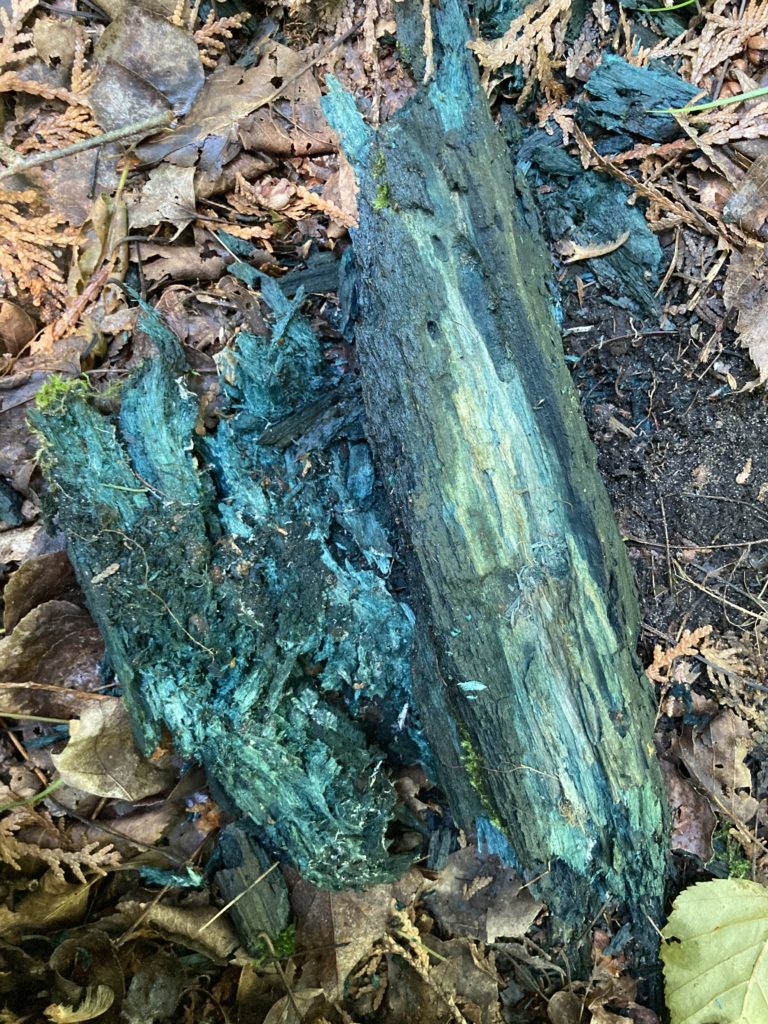 green stain fungus caused what we saw. This cup fungus is typically manifested in temperate forests with hardwood and conifer trees. There are occasionally small cup-like bodies that grow from the decomposed wood, however they are rare. The green stain that we saw is a much more common occurrence and is the signature trademark of the organism. The color alteration of the wood is caused by xylindein, a quinone pigment, which the fungus possesses. The unique green stained wood that the fungus creates has been highly prized in some parts of the world. Wood stained by this fungus is present in artifacts from as far back as the 15th century.

In the United States, there are two species of green stain fungus that can only be distinguished microscopically by the size of their ascospores. Those of Chlorociboria aeruginosa are slightly larger than that of C. aeruginascens. A fungal ascospore is created in the ascus for the purpose of reproduction. When conditions are optimal, eight ascospores will be released. Although this entire process takes place on rotted wood, neither of the Chlorociboria species is officially considered wood decay fungi. However, it is possible that they do have some minute erosive effects on the cell walls in the wood they colonize.

Once we all realized that a fungus juice stain duped us into thinking that a graffiti artist had gone rouge in the forest, we were slightly disconcerted as to how we had so creatively reasoned out what we had seen. However, all is well that ends well. Our imaginative minds eventually led us to the discovery of green stain fungus, another fascinating component of the woods, and there is no better ending to a story then that.