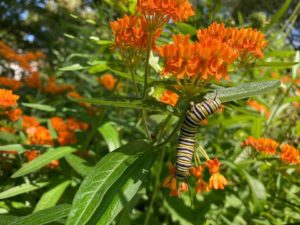 And this year, the “Upstanding Pillar in the Community” award goes to… the Monarch cater-pillar. I’m telling you, this six-legged pillar has been working very hard in the milkweed for decades to earn this distinction. Fighting storms. Fighting climate change. Fighting farm chemicals. Unfortunately, the Monarch butterfly, the caterpillar’s adult form, was recently put on the International Union for Conservation of Nature’s endangered list. This is not the distinction the caterpillar was looking for.

This iconic yet now endangered black and orange symbol of nature is something that most children in North America learned about while studying life-cycles stages. I remember my hard- cover Golden Book about Monarchs. I read it and re-read it as a child, fascinated by how one animal could take on so many different forms.

It’s estimated that there are roughly 8.7 million animal species on the planet. The IUCN lists over 16,000 of them as endangered and threatened with extinction. So why do we care about one species going extinct if there are 8 million of them and more?

Although the United States has not yet declared the Monarch endangered, in 1973 Congress recognized that endangered and threatened species of wildlife and plants “are of esthetic, ecological, educational, historical, recreational, and scientific value to the Nation and its people.” In other words, every one of them is valuable.

Each species offers benefits of natural diversity. They contribute to medical research. They support biodiversity and agriculture. They serve as environmental monitors – temperature takers. And then there are the intangibles. Songs, smells, sights… these are the things that make us happy.

So how in the world can we save 16,000 species right now? We can’t. And it’s overwhelming to think about, right? But collectively, we can start to take care of one species, and when we do, we may find that we’ve helped another along.

We can do something.  We can create butterfly gardens, even small ones, that offer nectar as the butterfly’s food. We can plant native milkweed – the leaves serve as food for the caterpillar and host for egg-laying. Common Milkweed is native to Wisconsin – easy to remember and incredibly important. Get active and tell others. Join a monarch monitoring blitz – observing and counting milkweed plants found, number of monarchs, number of eggs, etc… This year’s blitz goes from July 29-August 7. For more information, http://www.cec.org/international-monarch-monitoring-blitz/. Financially support an organization that can take bigger steps.

Believe in the intangibles. Give the caterpillar wings, and set it into flight.