I had a trail camera out at the end of our Cattail Trail for just a week, around a week or so ago. It captured some amazing things in just that short timeframe, and I would like to share with all of you what I got to see, as it really sums up how diverse and amazing just one trail can be.

A great blue heron flew in and landed with the grace that one expects from a bird with a 6-foot wingspan on our kayak launch. The heron stood perched on the launch for around half an hour, searching the water for a tasty meal. When a visitor walked down the boardwalk, the heron flew off (again with very little grace) into the marsh to find a new spot to eat.

What I thought at first was just the cattails blowing in the wind was actually videos of marsh wrens and red-winged blackbirds flying around the cattails of the marsh – singing their songs and calling out when someone got too close.

Later in the night, a fox trots into the frame holding his dinner. He glanced directly at the camera and stood there for a few seconds, as if showing off his hunting skills before disappearing out of frame to eat. 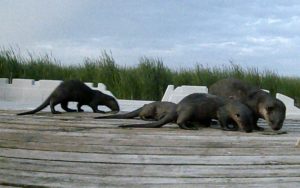 The next day a family of otters shows up! A mom with three pups. The kids are so excited to play on this new playground. As mom sniffs around the area the pups roll and slide all across the boardwalk. They wrestle and jump over one another, splashing water from their fur across the deck boards. The pups use the kayak launch as an otter launch, sliding off into the water. Mom follows soon after.

A young green heron struts across the boardwalk. With feathers ruffled, looking like it had quite the bad hair day, the young heron looks at the camera (maybe hoping no one saw how disheveled it looked?) before shaking its feathers back in place. Flying off into the marsh before a group of visitors arrive at the end of the boardwalk.

A day later the otter family is back, this time at night. The pups seem quite energized given that they are up so late, and the poor mom sits off to the side as they play. Probably looking for something to tire out the wild kiddos. The pups wrestle and roll all over the boardwalk, even bumping directly into the trail camera as they play. After an hour of playtime, the kids jump off the side of the boardwalk into the water, leaving mom to race after them before they wander too far.

A raccoon walked across the boardwalk, sniffing around, looking for a snack. Not too long after, it disappears into the marsh.

A red-winged blackbird lands on the boardwalk, singing away before flying off into the cattails. Maybe it needed a stage for its song this morning?

The otter family returned another night, this time the kids sniffed around the camera, not as wild as they were the past few nights. They practice their sliding skills on the wet boardwalk, as mom watches from the safety of the kayak launch. They play for a while before sliding off the kayak launch into the river once more.

Though I could go on and on about the cool animals that use our boardwalk, we also have people that use it too! From just this one camera check (just a week’s worth of time) we had around 112 people make it to the end of the boardwalk.

Almost a dozen people carried kayaks, off to explore the water around Woodland Dunes. Some people even came here from the water! How neat is that? People can visit us right from the river with our kayak launch.

Adults and kids alike carried binoculars, ready to scan the marsh for the wildlife that lives there.

People carried cameras, go-pros, and cellphones ready to take photos of the wildlife and scenery around them. Maybe they even got some photos of some of the things I saw on my camera too.

Someone carried a guitar, offering a new marsh song instead of the usual red-winged blackbird calls.

Some pushed strollers, some ran past on their morning jog, some just simply walked down for the sake of going for a walk.

Kids raced by holding nets borrowed from the Nature Center, ready to search for whatever aquatic animals they could find.

People of all ages walked to the end of the boardwalk. Exploring and enjoying nature. It brings me just as much happiness as seeing the baby otters slide across the boardwalk, to know that people come out here to see the amazing wildlife and scenery that our local community has to offer.