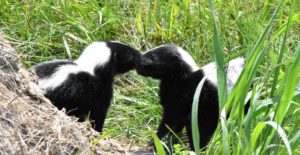 Recently, visitors exploring the nature center may have noticed an unpleasant smell coming from under the deck. A mother skunk had decided to make the deck her new home, along with her five babies. These striped mammals could be seen roaming around the nature center, especially in the Little Wings play area, which sounds like a great place to grow up as a baby skunk, also known as a kit!

There are two native skunks in Wisconsin; the striped skunk which is more common, and the spotted skunk. There have only been several sightings of a spotted skunk since they are rarer than their striped relatives. Until recently, skunks were members of the weasel family, but now have their own family, Mephitidae. They grow to be a size of a large house cat. Striped skunks have a white stripe starting as a triangle shape at the nose that travels down the middle of the back. These animals live in a variety of habitats such as farmland, the edges of woodlands, and shrubby areas along streams and ditches. They may also choose more urban areas to live-for example wood piles, or in Woodland Dunes’ case, a house porch. Skunks do not hibernate but still tend to stay in their dens most of the winter, and eventually, a litter of six to seven kits is born between the time of May to mid-June.

Skunks eat a wide variety of foods. These animals eat crickets, grasshoppers, and several other insects. They also eat small mammals such as mice, ground squirrels, rats, shrews, and moles. Since skunks are omnivores, they also eat various fruits and vegetables. Evidence that shows that a skunk is in the area may be diggings, which are shallow holes made by their claws and nose from searching for food.

Despite looking friendly and approachable, skunks will release a smelly surprise when they feel threatened. If they are encountered by a predator and feel threatened enough, they will release a musk under their tail that can spray 5 or 6 times and a distance up to 15 feet. The smell is so strong that one can smell it from a mile away. The only species that can tolerate this musk is the great horned owl, making it a highly dangerous predator to the skunk. People, unfortunately, cannot tolerate this pungent spray. It is important to give these animals the space they need since the smell of the musk is very difficult to wash out of hair, clothes, and fur. The musk can also burn eyes and cause temporary loss of vision. Signs that a skunk is about to spray are arching its back, lifting its tail into the air, turning its back to its predator, and stomping  the front feet. Skunks can make their scent at birth, so it is important to give the kits space as well! If you or a pet happen to be sprayed, the best mix to use is a quart of 3% hydrogen peroxide, a fourth cup of baking soda, and a teaspoon of liquid soap. Hydrogen peroxide can bleach, so you can substitute it for vinegar if that is a concern.

The skunk family at the nature center has now happily dispersed into the fields around, and we no longer see them around the building. We still appreciate them for the interesting characters they are, and wish them well.