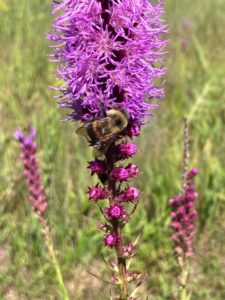 As we creep into late summer, insects become more and more an important part of the landscape.  On warm days cicadas now sing from the trees, and at night more and more crickets sing as well. Color and sound are powerful attractants for potential mates in both the human and natural worlds. It’s hard to equate the harsh electric whine of a cicada with whispered sweet nothings to a potential mate.
Populations of butterflies also increase, although our cold spring may have been hard on their populations.  Still, when the meadow wildflowers begin to bloom, they immediately attract dozens of species large and small, conspicuous and subtle.
But among the butterflies are the bees. They too come in all sizes and colors, from green metallic sweat bees to jet-black carpenter bees, to amber honeybees, to fuzzy bumblebees.  Just at the time of maximum wildflower blooms, armies of worker bumblebees are present to take advantage of abundant pollen and nectar suddenly available in the fields.
There are about twenty or so species of bumblebees in Wisconsin.  Some are abundant, like the common eastern bumblebee (Bombus impatiens), a medium sized bumblebee which is yellow on the thorax with a black dot, and only one yellow segment on and otherwise black abdomen.  Like all insects, bees have three main body parts- head, thorax, and abdomen.  You find eastern bumblebees all over around here, starting with queens early in spring and more and more small workers throughout the summer until now, when you see small workers, and large queens and drones.  The new queens, called gynes, are very large and brightly colored now.  They will mate with drones, then later find an abandoned rodent burrow in which to spend the winter and begin a nest which they will develop fully next spring.  The new queens are the only bees which survive the winter, all the workers, drones, and old queens will die.  This is different from European honey bees, which can all survive the winter if they are lucky and conditions are good.
The eastern is the most common, and probably least colorful of our local bumblebees.  They are just as important as others in terms of pollination, but like birdwatchers, bee watchers are always searching for interesting and rare species.  One species is endangered, the rusty-patched bumblebee (Bombus affinis).  This year we have found five or so at Woodland Dunes so far.  Others include the threatened yellow bumblebee (Bombus fervidous), the redbelted and tricolored bumblebees (B. rufocinctus and ternarius), brownbelted (B. griseocolis), northern amber (B. borealis), and the half-black bumblebee (B. vagans).
One of our volunteers found a very rare bee in her yard- the American bumblebee (Bombus pensylvanicus), of which hers is the only one found in our county so far.  And we found an unusual species, the lemon cuckoo bumblebee (Bombus citrinus) which is a parasite of other bumblebee species’ colonies.  A queen lemon cuckoo enters another species colony, kills the queen, and gets the other colonies’ workers to care for her eggs and young.  Sounds like a story worth of a TV miniseries.  But in the big picture, they don’t take over all the bee colonies and so don’t really hurt the overall population.
Bumblebees are a challenge to identify, even though there are only a couple of dozen species. Males look different from females, workers are different from queens and drones, and hairs wear off of old bees, changing their appearance.  The challenge makes for fun in trying to identify them, and builds humility for the aspiring bee observer.  Fortunately, Wisconsin has a Bumble Bee Brigade of citizen scientists run by the DNR, where help can be found for identification.  There is also an excellent Wisconsin bumblebee observers Facebook page.
There is never a lack of interesting subjects to study in nature. Bumblebees tend to be gentle and fixated on flowers, so you can stand in a field of wildflowers surrounded by bees, which is a wonderful experience.  But only for a couple of months- then we will have fall and winter to remember them only.
Photo- rusty-patched bumblebee found by Kennedy Zittel at Woodland Dunes