Dame’s Rocket
There has recently been a rising problem with an invasive species that is most commonly known as Dame’s Rocket (Hesperis matronalis).  This plant has been included in wildflower seed mixes for gardens for its aesthetic quality, since it produces flowers with colors varying from pink to purple to white.  However this pretty flower has become a problem as it has escaped the gardens and found itself spread throughout the edges of forests and the road side.  Not only has it escaped, but it has also become highly invasive due to its ability to proliferate large amounts of seeds.  Once this flower has been able to settle in a particular location, it produces several hundred seed pods throughout the summer with each pod itself containing hundreds of seeds.  These pods then break open in late August to early September. 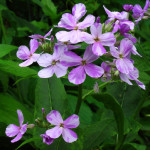 In order to put a stop to the invasion of the Dame’s Rocket, several steps need to be taken.  The first being proper education. It is important that the general public begins to realize that although this plant may produce pleasing flowers, it can be a hazardous plant.  For once planted, they can easily escape the edges of the garden to other locations.  Luckily these plants can be recognized by their four pedaled flowers that are held up by two to four foot stems which are produced in early summer.  Also on their stems they produce alternate leaves that grow up to six inches long.  Not only is it important that people begin to recognize what these plants look like and to stop intentionally planting them, but also efforts must be set forth to remove these plants from areas in which they have taken over.
There are two primary ways in which the removal of the Dame’s Rocket can be accomplished, the first being simply pulling them by hand.  This can be effective when the infestation only covers a small area and since the plant has a weak taproot it is relatively easy to pull out, especially in moist soils.  However it is important to note that if not all of the root is removed or it breaks off when pulling, those severed root can often times re-grow into another plant.  Not only that, but after the flower is pulled it can still use its remaining energy to produce and distribute its seeds.  That is why it is important to bag and deposit them in a landfill or burn them.  For larger areas, using chemicals may be an easier answer.  Using an herbicide such as glyphosate or triclopyr on the rosettes in either early spring or late fall should spare other native vegetation as well as get rid of the Dame’s rocket.  However it is always important to use chemicals such as these carefully and read their labels before application, as well as consider the effects they will have on the surrounding vegetation and environment.