The birds are gradually quieting down as they forget about tending territories and attracting mates and attend to many hungry young mouths.  Activity at bird feeders, relatively quiet for a while, is again high as parents bring, or are stalked by, their begging offspring.  Orioles have suddenly reappeared at my home feeder, and are again gobbling oranges each day.  Some birds have multiple nestings and are on their second or even third now, which seems exhausting to me as a parent.  Even though many are becoming quiet, marsh wrens have just started singing here, and indigo buntings, red-eyed vireos, cedar waxwings, and goldfinches are still nesting and very active.  They young ospreys are starting to think about flight, comically flapping and hopping in their nest while their parents bring and parcel out their fishy meals.

Berries are starting to ripen- raspberries, mulberries, invasive honeysuckles- just in time for, and I’m sure you won’t want to hear this, the start of fall migration.  Indeed, sandpipers have already returned from their arctic nesting grounds, and observers to our north are seeing the first Tennessee warblers moving south from Canada.  The warblers and other songbirds will depend on the ripening fruit to fuel themselves as they travel to their winter escapes.  This year the Restore the Shore project has planted about 2,000 fruit-bearing native trees and shrubs so far, many of which we hope will feed migrant birds in coming years. 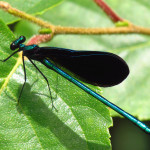 Thanks to this year’s offspring, there are more birds now than in the spring, making bird watching even more interesting.  There are also more and more winged creatures of other kinds about now, including insects.  While it was a terrible winter for monarch butterflies, some of the fields at Woodland Dunes have thousands of milkweed plants and many monarchs right now.  Also of interest are the ponds and other wetlands, where an increasing number of dragonfly species have emerged and are hunting and romancing their way through adulthood.  There are many species of dragonflies and damselflies- at latest count 463 species in North America.

While butterflies get most of the attention, dragonflies and damselflies are beautiful and exhibit so much variety of color and form.  In our area it’s not uncommon to see dozens of species of iridescent dragons and damsels- from the common green darner to the endangered Hine’s emerald.  Little bluets of several species are also common over ponds and bays, while others like the ebony jewelwing prefer streams.  Ruby meadowhawks, small red dragons, cruise over grasslands true to their name.  Other brightly colored species such as the calico and Halloween penants are also found here, and if you’re lucky you might see a red saddlebags whiz by, or one of the species with spots on their wings like 12 spotted skimmers or common whitetails. Digital photography has made identification easier, at least for those species which oblige by sitting still for a moment!

As with other aquatic creatures, a greater diversity of species of dragonflies is probably an indicator of a healthy aquatic ecosystem and good water quality.  In some species males are very territorial and possessive of females, driving other males away.  Others, like the familiar bluet, are fine with others around.  After mating, which takes place on the wing and sometimes high above the ground, the females deposit eggs, often on vegetation in the water.  Sometimes, they completely submerge themselves while doing so.  Many species spend nearly an entire year in their larval (nymphs we like to call hellgrammites) stage, and are often sensitive to pollutants in water.   Unlike butterflies, their metamorphosis is called incomplete, because they develop directly from the larval to adult stages without a pupal stage in between. 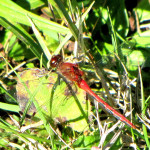 Like birds, some dragonflies migrate in fall, and large numbers of green darners can be seen moving along the Lakeshore, occasionally stopping as a group to feed, zig-zagging back and forth over fields in search of small flying insects like mosquitoes.

As we transition through mid to late-summer, the life around us becomes ever more diverse and enjoyable.  The next time you’re relaxing at a small lake or river, take a moment to appreciate the complexity and beauty of life around you, including the colorful little flying dragons hovering nearby.