The abundant rains of June have given way to a drier spell now, allowing everyone to catch up on mowing.  At the nature center that includes not only the lawn around the headquarters, but some of the trails that traverse open areas.  We try to find a balance between mowing for the convenience of trail walkers, and minimizing disturbance to wildlife out around the trails, so sometimes their might be a month between mowing as we try to miss optimum bird nesting times.

When these relatively undisturbed areas are mowed, small mammals are sent scurrying (with some indignation I would guess), and even this mundane task yields interesting discoveries. 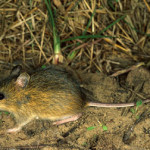 Recently, while mowing a trail through grassland a small, slender, very streamlined animal bounded out of the way, off the trail and into longer grass, like a tiny kangaroo.  At first glance it reminded me of a leopard frog with legs outstretched behind as it leapt farther into the meadow, but it was a very light brown, almost golden color- a meadow jumping mouse.

There are a number of species of mice and other mouse-like animals here, including voles, moles, and shrews.  Of the mice there are white-footed and deer mice, house mice and both woodland and meadow jumping mice.  The meadow jumping mouse (Zapus hundsonicus) is small, about 7-9 inches long overall, with half that length accounted for by its long tail.  The fur on its body is bicolored- it has a broad grayish stripe down the back but the sides are golden to almost orange.  They are white underneath, and have small heads and pointed snouts.  They are not endangered in our area, although they are probably not seen as often as other species.  They are reported to be solitary animals, living in meadows among the grasses from the Atlantic ocean to the great plains and from the tree line in Canada to New Mexico.  They feed on seeds, berries, and insects.  Males and females get together to mate, but after that the female rears the young, which takes about a month after they are born.  They may have two to three litters of five young each year.

In late September or early October, meadow jumping mice retreat below ground to hibernate, not emerging again until April or May in a much thinner condition.  Males emerge a few days before females in spring, and they commence eating and mating again.  They are apparently quite good at the later, and are generally considered to be neither threatened or endangered, except in New Mexico where protection of the species has caused tension between wildlife professionals and ranchers.

About 100 years ago people first studying the meadow jumping mouse claimed that they could jump incredible heights- eight to ten feet were reported to have been observed.  More careful study revealed that they actually leap two or three feet when need be- the equivalent of a human long jump of 30 or so feet.  Perhaps my favorite attribute of these little hoppers is that although I live in the country and have a rather porous old farmhouse foundation, they don’t seem to be interested in moving in for the winter like their white-footed cousins.  As such, we two species happily leave each other undisturbed and untrapped until we encounter each other again in summer.