One doesn’t need a calendar to follow the seasons, just an awareness of the world around.  I imagine that Native people were incredibly attuned to the phenology of the natural world, which changes from week to week between the frozen times.  After the thaw and maple syrup time, there is the frog season when they and woodcock call in the evenings.  Migrant birds return on a schedule over a couple of months, then nest and tend to their young ones, and one after another wildflowers bloom.  Later in summer, insects take over the singing duties from the frogs and birds, many of which get the heck out before winter, and the year starts again.  It’s such a logical progression, with millions of participants, honed over thousands of years to what it is today.

The parade of wildflowers is in itself amazing, moving from the woods where the spring ephemerals race to bloom before the trees leaf out and darken the forest, to the gaudy meadow and prairie plants that peak in late summer.  Emergent aquatic plants also participate, including sedges, pondweeds, and the beautiful pickerelweed.  On land, some of the most interesting plants are the composites, so named because their “flowers” are actually collections of many tiny flowers.  They are among the plants that have developed lately in terms of history, and their collective flower arrangement is probably efficient in terms of pollination- a visiting insect can pollinate many flowers while apparently just visiting one. There are many members of the composite family- dandelions daisies, asters, sunflowers and coneflowers- hundreds if not thousands of them.

Of the composites, members of the genus Silphium have a special place if for no other reason than Aldo Leopold wrote about one of them, the compass plant, in A Sand County Almanac.  Leopold had a gift for taking the time to appreciate the different actors in the natural world, and an eloquent way of writing about them.  The compass plant is indeed an interesting species, and we have some blooming in our prairie plantings, but there are others that are appearing in our area now.  Most of the Silphiums – compass plant, prairie dock, rosinweed, cup plant- are found elsewhere in the State on tiny bits of remaining native prairies, or on land that has been restored with native prairie vegetation. 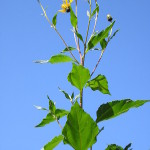 One of them, however, has made friends with our species and in turn we’ve helped it survive, and even thrive.  The Jerusalem artichoke (also called sunroot and sunchoke) is large all around- large leaves, large arrangements of bright yellow flowers, and large size overall at about 6 feet tall.  They are a native plant which produces tubers, and were cultivated by Native people and later by European immigrants.  Their exact native range is not known, as they were moved around by people as they established gardens.  They are one example of an aggressive native plant- one that will colonize and take over an area, and we probably encouraged that trait.  The tubers they produce were an important food source in the past, helping early settlers survive the winter.  The tubers are nutritious, but the carbohydrate they are composed of is not easily digested by people- we need the help of bacteria to do that, which can sometimes result in discomfort.  The tubers are high in fiber as well.

More important than their role as human food is their role in their ecosystem.  They are fed on by browsers and burrowers, and their flowers provide food for pollinators of many kinds.  They convert sunlight to food, and remove carbon from the atmosphere.

Jerusalem artichoke are common roadside plants, and are now showing their yellow flowers.  Look for them singly or in masses in ditches and old meadows, and enjoy them along with the many wildflowers decorating the landscape in late summer.