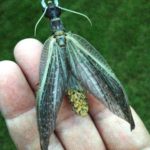 That we are fast approaching mid-summer is a reality that is hard for me to accept, as it is every year.  Nevertheless, the signs are there- the progression of blooms of wildflowers and grasses, newly fledged birds begging food from their parents, heat and humidity.  Like all living things we are carried along in the river of time, like it or not.

The Manitowoc River may not be as profound as a river of time, but it’s an interesting water- body with a complex natural and human history – and is of interest to me.  It suffers many of the afflictions that are borne by most of our streams, like past pollution from toxic substances and the present inundation of dirt and plant nutrients (many thanks to county Soil and Water Departments for trying to address the latter issue).  Despite the burdens we place on such rivers, some interesting wildlife species still try to hang on.

Over the Fourth of July weekend I was able to spend some time in a familiar place along the river and was reminded of the amazing habitat such riparian places provide.  One could find many birds, wildflowers (among the abundant non-native invasive species), and others.  Sitting on the bank, one can enjoy rose-breasted grosbeaks, yellow and common yellowthroat warblers, redstarts, bald eagles, hooded mergansers, pleated woodpeckers, wrens and catbirds galore plus dozens more species.  An attack force of squirrels- fox, gray (including black), and red assaulted any susceptible birdfeeder, and deer fawns and turkey broods nibbled and pecked their way through the leaves.

One evening, a glance at the ground revealed what appeared to be a large gray leaf that was moving slowly.  The leaf turned out to be a very large array of wings attached to an equally large insect.  It was grayish but not a moth- the wings were smoky gray and translucent, and on the head were two short but fierce looking jaws.  It was a dobsonfly, a female, and it’s been years since I’ve seen one.

Dobsonflies are one of the largest insects that aren’t moths in eastern North America and are about three inches in length.  Themales have huge mandibles- those of the females are much smaller.  They are mainly for show and aren’t used for catching prey.  They may serve in the occasional jousting match with a rival male dobsonfly, but as adults these insects live only a few days (3 for males, 8-10 for females) and they really don’t eat.  During their short adulthood the flies mate and females lay eggs on leaves which overhang the water, covering the eggs with a sticky white substance that makes the mass look like bird droppings.  When the eggs hatch, the larvae fall into the water where they live under rocks where the current is fast-flowing.  As they grow, they become miniature sea monsters that fishermen refer to as hellgramites. 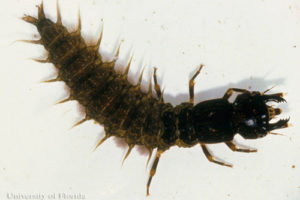 Like dragonfly larvae, the hellgramites are fierce predators of smaller creatures in the river.  In turn, they are sought after byfish such as small-mouth bass, and fishermen who collect them for bait. The next year the hellgramites emerge from the river to become adults in a synchronous fashion, which some say is triggered by the sound of thunder during summer storms.  They molt into adults to mate and begin another generation.

Dobsonflies/hellgramites are more abundant where water quality is good.  They’re indicators of the past health of our rivers, and are doing their best to survive them in their current state, like many other aquatic creatures.  Along with the redhorse and native mussels found in the Manitowoc, I hope that the condition of the river can be improved before they are lost.  I think it is safe to say what helps these creatures will help us as well.