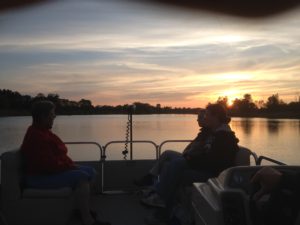 A few weeks ago I had the opportunity to go on a “bat cruise” on the West Twin river near Woodland Dunes. A bat cruise is a two to three hour boat ride done right after sunset spent monitoring bats with special equipment used to record bat frequencies. The information is then given to the DNR to interpret the frequencies and determine the bat species that live in the area.

All in all, we were on the West Twin for three hours. We started just at sunset, cruised up the river, and then idled down the river for two hours while doing the actual monitoring. We saw a few bats and the monitor picked up a lot of frequencies (for a lot of the bats we were not able to see).

Great Blue Herons, the biggest heron in all of North America, are extremely fascinating birds. They are typically four feet tall with a six foot wingspan, yet only weigh between four and six pounds due to their semi-hollow bones! Their wide wingspan and “S” shaped neck while flying make them fairly easy to recognize in flight. These awesome birds nest in trees but spend most of their time in the wetland hunting. The diet of a Great Blue Heron is primarily fish, amphibians, insects, reptiles, and some small mammals. At the twilight hour, the Great Blue Herons were wading near the edges of the river watching for fish. Any hour of the day can be hunting time for these spear-beaked birds, for they have eyes fully equipped with night vision.

Also present near the river at the twilight hour were owls. Due to their size, we were able to identify it as a Great-horned Owl. Twilight is actually the start of the day for these majestic birds as they are nocturnal! The most popular owl in North America, these birds are fierce predators that live in wetlands, forests, grasslands, and deserts.

Swimming alongside the boat during our bat cruise were muskrats! Muskrats are both crepuscular and nocturnal, meaning they are active at dawn, dusk, and throughout the night. Commonly confused with the American beaver, muskrats have longer, rat-like tails and are smaller bodied. Muskrats originate from North America but have since spread to other parts of the world.

Besides the bats, owls, and Great Blue Herons flying around the sky, the stars were out and beautiful that night. Also visible was Mars! We were able to spot the Milky Way, the Big Dipper, and the Little Dipper. Fireflies were shining brightly and beautifully for us too. It is truly amazing what can be found outside when you aren’t looking for it – especially at night!