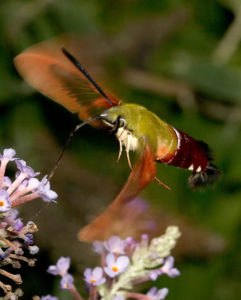 In gardens throughout the Midwest, there is a type of moth that is often mistaken for a hummingbird, the hummingbird moth. This moth looks almost identical to a hummingbird at first glance, but after you take a closer look, you will notice that in fact it is a moth. The hummingbird moth flaps its wings quickly just like a hummingbird, makes a very similar hum noise, and even looks as though it has feathers due to its hairy body.

Hummingbird moths have an olive-green, plump body with a reddish brown color on part of their abdomen. They also have a very long tongue that uncurls when they collect nectar from a flower, this long tongue is called a proboscis. Their wings can span up to five inches, and some species of hummingbird moth have clear wings due to a lack of scales.

After mating, a female hummingbird moth will lay only a few eggs on the underside of the host plant’s leaves. These eggs will eventually hatch into yellow-green caterpillars with dark red spots, green lines, and a horn at one end. The caterpillars will eat their host plant until they are large enough to cocoon, and they actually form their cocoon on the ground camouflaging in the leaf litter. If the cocoon is formed in the spring or summer, the hummingbird moth will hatch out in a few weeks, but if the cocoon is formed in the fall, the hummingbird moth will not hatch out until the following spring, surviving through the winter.

Unfortunately, the hummingbird moth is also attracted to the purple flowers of Japanese honeysuckle which is an invasive species. Many people might immediately think to plant honeysuckle in their yards to attract these interesting moths, but it would be better to plant native species such as bee balm or verbena, which are both beautiful flowers.