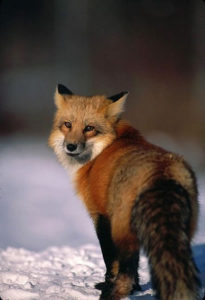 A few weeks ago one of our interns, Breanna, noticed several white feathers on the ground near the tower at our headquarters of Woodland Dunes. She then saw them on the bottom level of the tower and finally, at the top of the steps she found the remains of a gull. The rest of us decided to investigate a little deeper. We soon found what looked to be an owl pellet at the top level of the tower, but by taking a closer look we knew it could not be a pellet but instead must have been scat from a canine. This scat had feathers in it, obviously the feathers of the gull, therefore it was the predator. We believe that this predator was either a fox or a coyote.

Red foxes are small dog-like animals with a light body that allows for agile movement, a bushy tail, and a pointed face. They are most commonly known to be red, but can also be brown, black, and silver. Once 7 months old, they leave the den in search for their own hunting territory and mainly live in solidarity. Red foxes are primarily nocturnal, but they can commonly be seen during the day. They are excellent hunters due to their great night vision, smell, and hearing. Red foxes mainly prey on small mammals such as rabbits, mice, voles, and even birds such as chickens. Therefore it is possible that a red fox could have been the predator of the gull.

Coyotes are also in the canine family and are a little larger than red foxes. They are typically found in forests and their populations are increasing. Coyotes are excellent hunters due to their strong vision and smell, and they can even run up to 40 miles an hour. They mainly hunt at night and  typically eat smaller animals such as rabbits, rodents, and fish, but will even go after larger prey such as deer and young livestock. Unlike the fox, they form packs during the fall and winter months to increase their hunting efficiency.

While hunting smaller prey, both red foxes and coyotes have similar hunting strategies. They will stand still listening for their prey and its exact location. Then they will pounce, sometimes jumping high into the air! Red fox can even hunt animals that are located up to three feet under snow due to their exceptional hearing, picking up on low frequency sounds of their prey.

Foxes and coyotes are important parts of our ecosystems.  They help to balance the populations of prey animals and limit devastation of plant communities.  They help maintain the health of prey populations by taking animals which are ill.

Although the exact identity of the gull predator may never be determined, I have come to the conclusion that a fox was the culprit. One, if not several, have been spotted around the nature center in the last few months and their quick witted hunting strategies would be able to take down a gull. Not typical prey for a fox, but nature is full of surprises.