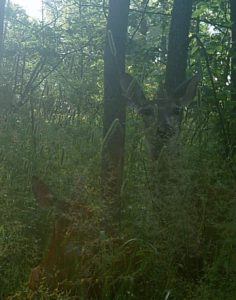 One afternoon, not too long ago, I was wandering around on the Woodland Dunes property near the marsh house when I came across a track in a small patch of wet earth. It was about the size of a half dollar coin, close to the same shape as well. Near it were others, nearly identical to the first but twice as large. Continuing down the trail I had been following I found more of the same, but this time the small track was obscured by another that had fallen almost on top of it.

The tracks that I found belonged to a doe and two young fawns, probably no more than a month old. How was I able to tell the age and number of deer just by looking at a few tracks? Well, a little experience doesn’t hurt, but anyone can figure out these facts by just looking for a few key attributes to the tracks.

The first, and probably the easiest, thing to read from a track is the relative age of the deer. A young deer will leave a very small shallow track, even in some of the softest material. As logic would have it, as a deer matures its hooves will grow leaving a larger track. Looking at the size of the track will get you as far as distinguishing between a young and a mature deer, but to determine the age of a deer more accurately will require a little more careful examination of the track.

Just like the tires on your vehicle lose tread throughout their life, so do the hooves of a deer. Over time the sharp edges and points of the hoof will wear away and will become more rounded. This translates over into the track fairly well especially when the track is in good soft damp soil. Looking at a deer track, if the tips of the hoof are rounded instead of sharp and pointed this will point to a more mature deer. Looking at the bottom of the track can also help you — if the edges are more rounded this also leads to the conclusion that the deer is more mature than if the track has nice sharp edges.

Distance between tracks can also help in determining the size of the deer that you are following. Just like a smaller person will take shorter strides as compared to a tall person, a young deer will leave less distance between its tracks as will a mature deer. And because deer usually walk in a staggered pattern, allowing distance between footfalls to be measured, we can also use this information to determine number of deer walking together.

As I mentioned before, deer usually walk in a staggered pattern, sometimes there will be a small overlapping portion of the front and rear tracks, but usually the tracks are individual. Because of this, if you run into a track where one track is almost completely on top of another it usually means that more than one deer walked through the area that you are observing. This, combined with a little exploration further down the trail can you how many deer have been down the trail.

Hopefully next time you walk down the trails here at Woodland Dunes, or anywhere else for that matter, you take some time to stop and study any tracks you may come across. You may be surprised with what you learn.