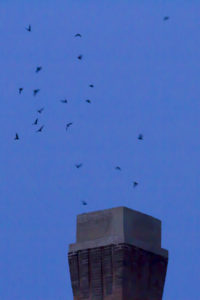 Biological autumn is already upon us despite the warm, humid days.  All around, beleaguered bird-parents are being pestered by the hungry nestlings they’ve raised: wrens, catbirds, swallows, finches, ospreys.  The sound of begging is everywhere, and sometimes, I pity the adults.

Even indoors at the nature center, we could hear the sound of nestlings chattering in the chimney every time the adult chimney swifts came back to the nest with a load of insects for their young.  Since a new furnace was installed, the old chimney is no longer used, but it still serves as a nesting and gathering place for these interesting birds.

Before people settled here and built houses with chimneys, the swifts nested in holes in large, old trees, in caves, and on cliffs.  Swifts have probably also benefitted from additional man-made structures for nesting and roosting.  Other than nesting and roosting, chimney swifts spend all of their time flying.  Like bats, they catch insects on the wing (but during the day rather than night), and even wash themselves by dipping on the surface of ponds then shaking the water off as they go.  They are long distance migrants, spending winters in South America.  Because they are built for continuous flying, they are able to fly right over the Gulf of Mexico, feeding in the air as they go.

Although chimney swifts nest only one pair per chimney in the spring (sometimes joined by a few non-nesters), when they migrate in the fall, they may congregate at night, sometimes by the dozens, hundreds, or even thousands in chimneys or other suitable structures.  When they do, it’s a good time to count them. Volunteers in some places conduct coordinated monitoring on what is called a Swift Night Out.

Chimney swifts eat tons of flying insects and do no harm to people.  Their population seems to be declining, and there might be several causes for this.  First, people no longer need chimneys to vent furnaces so new masonry chimneys are not being built and the old ones are being capped off. Second, there is concern about pesticide contamination of the insects on which they feed.

If you know of large roosts of chimney swifts in our area, please let us know, 920-793-4007.  If you have an old chimney, consider maintaining it and keeping it open for these birds.  I have one at my home, and there’s one at Woodland Dunes that are both occupied by nesting pairs, and at least one serves as a roosting site for migrating birds for a few days.  Also, towers can be built that act like chimneys and provide a nesting and roosting place for the swifts.  We have one attached to the barn at Woodland Dunes.

The aerial insectivores, as they’re called (swifts, swallows, nighthawks and whippoorwills) are fascinating birds which, like many species of wildlife, would benefit much from just a little help from us.

(photo is of swifts entering a chimney to roost during fall migration in Green Bay, taken by Nancy Nabak).