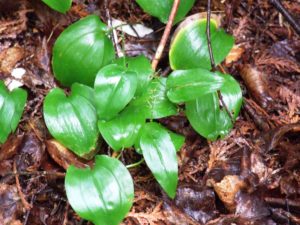 I am fortunate to have two daughters and a son who enjoy being outdoors.  They’re not children anymore – the youngest is in college now – but we’ll always enjoy sharing nature with them.  I’m especially lucky that before going off to college my youngest asked if the two of us could make one more trip to the Boundary Waters – our favorite vacation destination.  I’m also lucky to have a wife who doesn’t mind such things, so my daughter and I obtained our permit, packed up the canoe and our wilderness gear, and went into the bush of northern Minnesota.

Our goal was not to set endurance records, and we picked a lake with a boat landing and many campsites scattered around it’s 4300 acre area.  After about a half day of paddling, we found a sheltered campsite on a small island and settled in for a few days.

Our wilderness trips are mainly about two things: being absorbed by nature and problem solving as needed.  We don’t seek to take from the wilderness, but to observe and try to understand it.  Each campsite is different and we feel ourselves as temporary lodgers in the homes of the permanent or seasonal wild residents.

Our site on Brule Lake was like others in the far north- populated by northern trees such as cedars, spruce, balsam fir, birch, red maple- come to think of it the same species that cover Woodland Dunes and Point Beach.  On the ground are northern bush honeysuckle (a native shrub), various mosses and lichens, and wildflowers such as clintonia, starflower, Canada mayflower- again typical of wildflowers found at the Dunes.  Especially interesting were the miniature landscapes created by growths of mosses and lichens. (Pixie cup lichens have an almost extraterrestrial feel).  In our area, Lake Michigan keeps it cool enough in summer for such species to survive.

As one sat quietly for a while, the resident birds began to appear.  This campsite was in the territory of a pair of robins- not the ones that relish worms on our lawns, but their wild, forest cousins who move quietly beneath the trees flipping leaves to find the edibles beneath.  Red-breasted nuthatches, our alarm clocks in the woods, visited our site every hour or so.  Bald eagles, turkey vultures, crows, and ravens flew over and a number of loons occupied the various bays around the large lake – calling day and night.  Our favorites were a family of noisy Black-throated green warblers, nesters in tall hemlocks and pines, which seemed to circle our island every hour or two.  The two adults were besieged by several fledglings which constantly begged for food even though they were obviously capable of finding their own.  The parents mostly ignored the racket, feeding themselves, but once in a while they indulged their children which I’m sure perpetuates their begging behavior.  I am glad my nestlings are beyond that stage of life- or are they?

There was also a little red-backed vole we called Mikey (from Myodes it’s taxonomic name) who appeared whenever a plastic bag rustled, hoping for a snack.

Like the plants on the island, many of the birds are also species that are found every year at Woodland Dunes which causes me to wonder why I make the 10-hour drive to reach my vacation destination.  Of course there are other special aspects of wilderness, especially the extended peace and quiet, which make it so special.

But still, there are bits of that wilderness remaining around our area, including Woodland Dunes, and we do ourselves good to visit them if even for a short time.

Photo- Canada mayflower, found in both the far north and at Woodland Dunes.