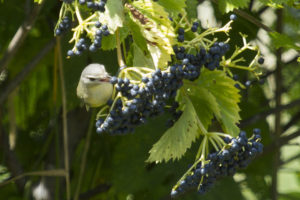 Nature has a way of working out win-win scenarios as different species coexist with one another over long periods of time.  Now that it’s September, we are surrounded by untold numbers of such relationships unfolding during this season of abundance and migration.

Flowers are abundant now, and have prospered from our warm moist summer.  They feed the countless insects whose numbers are at their peak.  They in turn feed spiders, some of which grow to startlingly large size and color, the likes of which we don’t see the rest of the year.  They and a lot of other things feed the ants, whose colonies grow large and this time of year produce new queens and drones, often after a rain.  The plants which bloomed earlier now produce seeds or fruit which feeds so many creatures.

Our Lakeshore is a special place for birds, one of the best in the State.  Now, in addition to local birds, migrants come flooding out of the North.  They are of all sizes and colors, and for many their journey south coincides with the abundance that the summer has produced here.  This is a time of year we plan for at our preserve- in the last three years we’ve planted about 5,000 trees and shrubs of native species, mostly chosen to benefit native animals and especially migratory birds which face an incredibly difficult journey.  The insects that feed on these plants and the fruit they produce makes a difference as to whether a songbird survives migration, or dies in the attempt.

We noticed a couple of examples recently.  In our butterfly garden, in addition to host and nectar plants for insects, there are some berry-producing shrubs, and in the yard of the center there is a large mulberry tree.  If one watches, one can see many species of birds feeding together on the fruit, including birds like warblers and vireos which we don’t often think of as feeding on fruit (they mostly dine on insects).  This time of year berries are abundant, and they don’t squander a good food source. 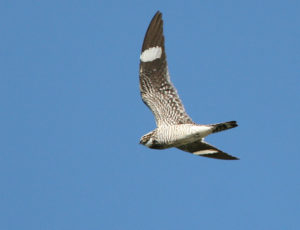 Another significant event has been the migration of nighthawks along the shore.  After a meeting in Two Rivers last week I stepped outside and noticed a steady stream of nighthawks coming from the north.  Coincidentally there was also a hatch of flying ants that evening, which no doubt fueled the nighthawks on their way.  In a few minutes I counted 437 of the birds flying over, the most I have ever seen at once.  Who knew that the parking lot of the Lester Library would be a birding hotspot on that day?

Change is literally in the air now, and even though there are not as many birds now as there were years ago, their seasonal movements are still amazing to witness.  We’ll continue to do all we can in our little corner of the world to help these wonders continue.

Photos- a warbling vireo eating viburnum berries at Woodland Dunes taken by Nancy Nabak, and a common nighthawk from Wikipedia