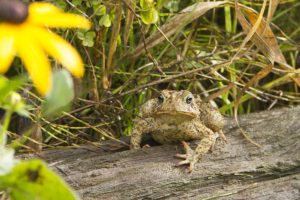 “They breathe through their moist, smooth skin. They are born in the water and spend their first stage of life in water, and then are capable of living on land and water. They have long legs, perfect for hopping…. What animal am I talking about?”

“FROGS!” This is exactly how we introduce frogs to the younger students that come to amphibian related field trips at Woodland Dunes. Frogs are probably one of the more widely known animals that live in a wetland, so it is no surprise that children are so familiar with them.

For as long as I can remember, frogs and toads have always fascinated me. I remember catching over fifty baby toads with my neighbors when I was a young girl. We created a “toad school,” a “toad salon,” and all of the other amenities a toad town would ever need. That is one of my fondest memories from my elementary school days and probably part of the reason I am so interested in frogs and toads!

There are many frog species and one toad species that call Woodland Dunes their home. One of the more widely known frog species at the Dunes is the Green Frog. Their “DUNK DUNK’” call can be heard from the pond to the end of the boardwalk! Children always love to imitate their fierce call. As with all frog and toad species, the males do all of the calling because they are trying to attract females. Green frogs can be identified by their green heads and brown bodies and can be found near bodies of water.

Similar in size to the Green Frog, the Northern Leopard Frog is another species that is very present at Woodland Dunes. The call of this species sounds like a slow-paced creaking door! They have green-brown bodies with dark green “leopard” spots. Leopard Frogs live in a variety of habitats, including near ponds, streams, and rivers and meadows. This frog species is often called the meadow frog because it tends to live in meadows, away from standing water.

“Look-it-up, look-it-up, look-it-up!” The Wood Frog call sounds a lot like the words “look-it-up” at a really fast pace and can be heard as early as April. Wood Frogs can be found walking down Willow Trail, Trillium Trail, or any wooded area at Woodland Dunes. They are mostly brown with a black mask through their eyes.

The only toad species of Wisconsin, the American Toad, also has a home at Woodland Dunes. The musical trill-like call of the American Toad, commonly confused for crickets, can be heard from spring to early summer. Their bodies range in color from brown to olive green and have noticeably bumpy skin. The habitat of this toad species varies, for the American Toad only requires a habitat with insects, moisture, and shallow waters for breeding.

The four aforementioned species are the species most commonly seen at Woodland Dunes. My favorite frogs are tree frogs, and I think I will have to write about them next week.. To be continued..

photo of American toad at Woodland Dunes by Nancy Nabak