The Mystery in the Milkweed
Breanna Gosh, summer naturalist intern at Woodland Dunes

There are many creatures that can be found in the milkweed, from Monarchs to Milkweed Beetles, from Aphids to Lady Beetles. Birds, such as the Yellow Warbler and the Indigo Bunting, often use milkweed seeds as nesting material. While perusing through milkweed plants in search of Monarch caterpillars for an education program, Jess and I came across a tree frog perching on a milkweed leaf. This tree frog piqued my interest because it was a tree frog unlike any that I had seen before – it was lime green! 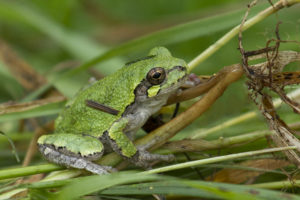 I immediately researched the tree frogs of Wisconsin, trying to identify the species of which we found. As it turns out, two of the five tree frog species that can be found in Wisconsin are so closely related that it proves very difficult to identify one from the other. Tree frogs in general, however, are very distinct from other kinds of frogs. They have adapted to require less access to water. Regular frogs, like Green frogs and Leopard frogs, need frequent access to standing water. Additionally, the anatomy of a tree frog is very different than that of a regular frog. Regular frogs have long, strong back legs, designed for swimming and hopping, and short front legs, designed for navigating through the water and catching the ground while hopping. Regular frogs have webbed feet to help them swim. Tree frogs, on the other hand, have sticky pads on their feet to make them more efficient tree climbers. Their limbs are about equal in size – this helps them climb, leap, and land from branch to branch.

Naturalists from areas in which these two species live have claimed that the only true way to tell these two species apart is by their call, for the Eastern Gray tree frog has a three-second trill and the call of the Cope’s tree frog is a more rapid, nasal trill. Frog communication researcher Dr. Carl Gerhardt from the University of Missouri has found that the difference in the number of chromosomes is responsible for the difference in the calls between the two species. An interesting fact that Dr. Gerhardt has discovered is when the temperature is about 75 degrees Fahrenheit, both calls change and become more distinct. In warm weather, the call of the Eastern Gray tree frog has distinct pulses, whereas the Cope’s tree frog sounds more like a buzz.

It appears as if the mystery in the milkweed may only be able to be solved by a night spent in the prairie, intently listening and distinguishing the trills.