I’m glad that we experience the quarterly changing of seasons.  Like so many, I look forward to fall after the warm muggy summer we experienced, or perhaps are still experiencing.  Although I know from the calendar that the seasons are of equal length, some certainly do seem to take longer than others.  Like many, I think I prefer autumn the most because it is more comfortable to be outside and there is more wildlife activity to be seen. 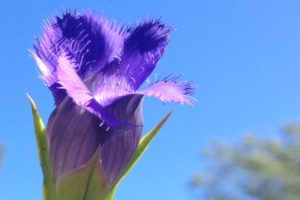 People often ask how this season compares to others in past years, and it’s always hard to comment on that.  Weather systems and trends in weather systems  can last days or weeks, and can temporarily and significantly affect natural events like blooming times and migration dates. There are a lot of things going on right now that seem out of the ordinary, but whether they are significantly so is hard to determine, but sometimes it’s fun to just observe and speculate.

This mild, warm weather has made for a great growing season, I think.  We’ve planted about 1,500 native trees and shrubs in our preserve and on surrounding properties in cooperation with the landowners. The rainfall we’ve experienced has saved us many hours of time that would have been needed to water the plants.  The soil has been almost constantly moist, and it appears that the transplants are doing well, even experiencing a late fall burst of growth.  In some species, this is aided by the added nutrients from the first falling leaves of the season.  I would expect that there has been a lot of groundwater recharge in our area this year, which may help the forests in fall and winter, except maybe for those plants susceptible to mold and other fungal problems.

Indeed, fungi appear to be having a great year, and a walk in the woods reveals an almost infinite variety of forms of the fruits of these mysterious organisms which populate the soil and rotting wood.  We may not appreciate the thought, but the ability to breakdown dead material makes fungi an incredibly important part of our ecosystems, and I think it proper that they get the chance to show off a bit on years like this.  Without fungi, green plants like trees and orchids wouldn’t survive well if at all- after millions of years of cohabitation they depend on each other.

Even though the trees are just starting to brighten and some losing their leaves, others, like American hazel, are flowering now. There are also many interesting wildflowers to be seen yet.  Asters and goldenrods, orchids and other beauties, put on one more show before November hits.  Gentians are interesting wildflowers of several different species which bloom here in late fall- last week our friend Rob Zimmer was able to find some on our property.

The moth larvae that we call wooly bears are now seen purposefully crossing roads for reasons unknown.  To them, the plants must seem greener on the other side, but I don’t think I would want to challenge automobiles if I were a caterpillar.  Some years I notice these fuzzy insects on the roads in late August, but for some reason this year they seemed to be a couple of weeks late.  Not a very scientific observation, I’m afraid, but something that I wonder about. 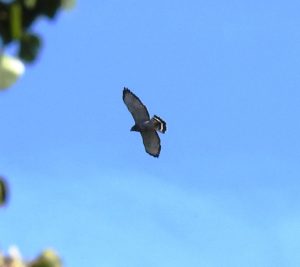 Likewise, some birds seem to be taking their time moving south.  There are still rose-breasted grosbeaks around and hummingbirds (don’t take down feeders yet).  Most migratory birds seem to be moving as expected when conditions (calm nights) favor their nocturnal flights. There have been lots of thrushes, warblers, and vireos moving through already, and the wild grapes, woodbine, and other berries are becoming fewer on the trees as they fuel the flights.  During the day, the first migrating hawks are also moving through. We’re hoping for good weather for our Hawk Watch on September 30.  It will be a while yet before the bulk of waterfowl and snowbirds like juncos and tree sparrows make it here in large numbers, but that day is coming (and saw-whet owls for that matter).

If you planted native trees and shrubs for the birds, now is the time of year that it pays off.  While they literally enjoy the fruits of your labor, you can enjoy watching them, knowing you made the natural world just a little bit better.  Reward yourself by allowing a little time to explore this wonderful, fruitful season and all it has to offer.