There has been a lot of earth moved on Woodland Drive lately, on a field that has been a part of our preserve for more than 30 years, and I suspect a lot of people are wondering what’s going on.  The purpose for the work is to give back to the land something that was taken away long ago.

The land around here works hard for us- we’ve logged it, drained it, farmed it, built on it; it’s supported us in many different ways.  For thousands of years before that it supported wildlife in many different forms, and in many places that wildlife has just had to get out of the way.  On the parcel of land in question, there was no doubt a wooded wetland and a creek- one that old timers would refer to as Forget-Me-Not Creek because of the flowers that immigrants long ago planted along it’s banks.  Fish, including northern pike would migrate up from Lake Michigan to spawn in the spring, woodland and wetland birds would nest, frogs and salamanders would lurk before logging and agriculture changed it.  The creek was straightened and tiles were installed to drain the soil, and crops were raised.  After being purchased by Woodland Dunes, the land rested and wildlife returned.  Grassland birds like meadowlarks and clay-colored sparrows, monarchs on the milkweeds, and the like.  It would be great if that could continue on its own, but these days invasive exotic plants like reed-canary grass creep in an crowd out the natives and management is required.  On the Woodland Drive site, many of the lower areas were choked out by reed-canary grass, and the land was again slowly losing its value for wildlife.

Wisconsin Public Service contacted us and was willing to partner together on a restoration project.  Extensive survey and planning was involved, and consulting engineers predicted what sort of wetland could be re-created on the site.  Regulators were consulted and permits obtained, and after more than a year the project was just about ready to go.  For us, though, it was important to wait until at least late summer so that those grassland birds had a chance to nest and produce their young for this year, and while we were monitoring that we realized that there were a lot of monarch butterflies laying eggs on the milkweed plants.  Our staff found caterpillars and moved them to milkweeds on other parts of the preserve, and we also contacted Ann Shebesta who with other monarch enthusiasts including friends Jessica and Jennifer and people from various parts of the State came and removed more than 1,500 eggs and caterpillars.  Many of those will be raised safely in captivity and released as adults. 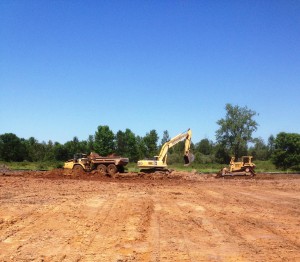 A couple of weeks ago, our excavator was ready to begin work, and more than 15,000 yards of soil were moved to scoop out a shallow seasonal wetland and create a berm overlooking the site.  With the help of an environmental consultant we will be re-establishing native vegetation on the land, with a special emphasis on wildflowers that benefit pollinating insects such as bees and butterflies.  The result will be a place where waterfowl can stop in spring and fall, dragonflies and other insects along with frogs and salamanders can find a home, and grassland birds and mammals can live and nest.  A cover crop has already been planted, and we expect the site to green up shortly, and we look forward to watching the water return as well as wildlife.

A key part will be future management of the site- invasive plants will again attempt to move in and will need to be controlled forever.  The site will benefit from periodic burning to keep the wildflowers healthy also.  There is already an observation platform and small parking area on the site, and another viewing spot may be added in the future.  In that way not only wildlife will benefit from the restoration, but people will be able to watch and learn about the dynamics of nature on the property.

Caring for our special natural places in Manitowoc County, if done correctly, is not easy.  It is, however, perhaps one of the most important things we can do.  In this case, it’s fortunate that interested partners found each other to make this project happen.