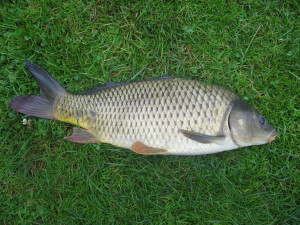 If you have ever spent any time along one of our two Twin Rivers here in Two Rivers, no doubt you have heard the signature flopping splash of the common carp. The East and West Twin rivers offer up perfect habitat for these big lumbering fish. Slow currents combined with low dissolved oxygen levels and high sediment load create a habitat where the carp is the prominent fish species.

During a routine monthly water sampling on the West Twin river — at the end of the beautiful Willow Trail here at Woodland Dunes — I literally stumbled upon a carp. I had been wading through the water collecting macro invertebrates when my foot landed square on the back of a good sized carp. As one might assume, neither the carp nor I expected this to happen. The fish took off, becoming entangled in the small net I was using, and I, rather embarrassingly, let out quite a yell. I quickly composed myself, realizing that the carp was still captured in my net, grabbed it by the gills and tail, and hoisted it out of the water for a picture.

The common carp was brought to the United States in the 1800’s from Europe as a food source, but with almost no natural predators and  perfect breeding conditions, the population quickly spread. While its numbers are such that would make it a great food source, the polluted waters that the carp thrives in have given the fish a bad name and turn most people off to the thought of eating them. In fact, in many parts of the world, smoked carp is a delicacy. Even with the negative feeling surrounding the carp’s name, there are a few commercial fishermen making a living fishing for these giants.

Carp spawn in the shallows and root up the muddy bottom, which can be hard on native plants and add suspended sediment to the water. Removing carp is often an important part of stream or lake restoration projects. At Clam Lake in northwest Wisconsin, carp are being removed and also excluded using netting from areas where wild rice is being re-established along the shore.

Growing up near the East Twin river has taught me just how much fun it is to catch a giant carp. I have spent many a summer night on the bank of the river, lines in the water, chasing bigger and bigger fish. After a while I became fairly good at hooking into these monsters. I would take my biggest rods and string up fairly heavy line — 35 pound test braid was my favorite — slide on a heavy weight and tip the whole rig with a circle hook baited with a few corn kernels. I would sling the rig as far as I could, then sit and wait for a bite, preparing myself for the fight that would ensue. The largest carp I ever landed was 25 pounds, but the ones that got away surpassed that mark by far, as “the one that got away” always does.

Even thought carp are generally thought of as a “junk” fish, they are here to stay so we might as well make the best of it. After all, they put up one of the best fights of any fish I have caught in the whole Upper Midwest.