One morning, Jim, the Executive Director approached me and said, “Corrissa, would you like to come with us to rescue monarch eggs and caterpillars?”

Throughout my college career, I never thought that I would hear this question at my future place of employment. I am blessed to have had these types of experiences in the past two years working at Woodland Dunes. 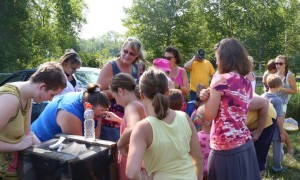 Not knowing exactly what to expect, I eagerly said yes. That afternoon, we visited the wetland mitigation site on Woodland Drive in Two Rivers. Excavation would be starting in August, and now was the time to collect eggs and caterpillars from milkweed plants in that area. We were instructed to carefully take the eggs and caterpillars off the leaves, and to place them in safekeeping until we were done.

After a slow start sifting through smaller milkweed plants, we moved to a patch with larger milkweed plants. Jackpot! Each plant often had more than just one caterpillar living there. As I gently removed them from the leaves, their legs, resembling suction cups, attached to my fingers. My excitement increased as I collected one after another. That afternoon, the interns and I collected over 50 monarch eggs and caterpillars. 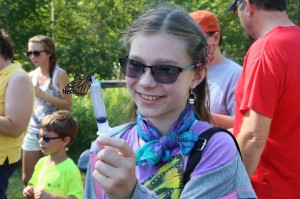 This past Friday, August 14th, over 100 monarch butterflies were released from the group of 1,500. This was the first group of monarchs that hatched, and more will be released as they burst free from their chrysalises.

I was able to bring my 20-month-old son with me to the release. He went right up to the netted compartment where the butterflies were held, and couldn’t stop staring at these beautiful creatures. His bottom jaw was locked in the “oh my goodness” position.

To everyone who was able to experience the release, it was sure to make a lasting impression.

Monarch butterflies go through four stages during one life cycle, and through four generations in one year. Before experiencing the monarch butterfly rescue excursion, I never researched their survival process. The formula to their success is complex, and experiences like this are amazing.