That last large low pressure system to pass over us caused a couple of fall-like cold fronts.  To we humans it is a wake-up call reminding us of the coming season, but wildlife has been preparing for a while now.

Mid to late August is a time of significant bird migration.  Our summer resident birds haven’t necessarily moved yet, but there are many millions of birds that nested farther north that are now winging south.  Shorebirds, the many species of sandpipers and plovers, are among the first to move, and Manitowoc County is an important stopover place for them- we have a lot of shoreline and wet fields on which they can find food.  Shorebirds are both a delight and challenge, especially in fall.  There are dozens of species, many of which look very similar to one another, so identification can require patience and attention to detail.

Right after the shorebirds, the aerial insectivores really begin to migrate.  Right now there are many swallows moving south along the Lakeshore- one can count thousands in a few hours some days.  Barn and cliff swallows move early, along with purple martins which travel so far south during migration.  Warblers and vireos from the north return in a less noticeable way, working their way through the shrubs in search of bugs and berries.  Orioles, absent from some places for the last couple of months, suddenly reappear and are as hungry as they were in May when they were flying north.  Chimney swifts, present in small groups during the summer, now gather into larger flocks during migration when hundreds may use a single large chimney as a temporary roost.

And then, there’s the invasion of the goatsuckers- an appropriate title for a bad sci-fi film.  Goatsuckers, or nightjars as they are also called, include the common nighthawk and whippoorwill, and seem to be the avian counterpart to bats.  They are active during the night, swooping deftly through the sky to catch insects on the wing.  This last week of August is when the nighthawks usually migrate, and you can see them in groups at sunset- graceful birds with long, narrow, pointed wings and long tails.  Each wing has a white patch on the underside.  These birds are a delight to watch as they whirl and turn in the air in pursuit of their tiny prey.  They don’t echolocate insects as bats do, but instead rely on their eyesight and hairlike structures around their mouths to indicate when prey has been found.

People long ago apparently assumed that if their goats were dry of milk in the morning, that night-flying birds were the culprits, which is quite a fantasy.  Birds, of course, do not consume milk (I wonder if they could even digest it), although pigeons, doves, flamingos, and some penguins can produce a milky substance which is referred to as crop milk for their newly hatched young.  It really is not very similar in composition to the milk of mammals. 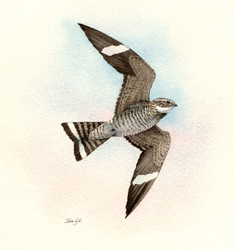 Nighthawks used to be common birds in most cities, where they nested on gravel-surfaces flat roofs.  They used to be seen in Manitowoc and Two Rivers constantly during the summer, but not any more.  Loss of open-understory woods, fewer gravel-surfaced rooftops, and affects of pesticides probably have all contributed to a decline in their population of about 2% each year.

At least for now, we can still enjoy swooping nighthawks from the far north as they visit in August.  Perhaps we can appreciate this annual “Invasion of the Goatsuckers” enough to try to help their population recover.